After forwards Park Jong-ah and Han Soo-jin scored a goal apiece in the first period, Britain fought back early in the second period. South Korea then stood its ground until Kim Hee-won delivered an insurance goal with less than six minutes left in the contest.

Murray said her players came out a lot more determined than they were in the 5-1 win over Slovenia on Sunday.

"We play best when we play tough opponents because we don't take them for granted," she said. "We knew they were going to throw everything they had at us. So we were ready for that. The girls really stepped up."

South Korea, ranked 23rd in the world, appeared a bit flustered early on against the physical play by Britain, two spots above in the world rankings. After losing to the Netherlands 5-4 Sunday, Britain had to defeat South Korea to have a chance to win the tournament and earn a promotion to Division I Group B next year.

"We had a little bit of a hiccup after they got that goal," the coach added. "We lost our focus a little bit. But we showed a lot of mental toughness and refocused. We were really good in the third."

Park, one of South Korea's most skilled players, broke through with an outstanding individual effort at 15:55. Murray credited the opening goal with sending the jolt up and down the bench.

"It definitely brought up a ton of energy," she said. "Our team is a smaller team and when teams play physical against us, we have a little bit of trouble. After getting that goal, our energy was up. Everyone fed off of that and we just kept going." 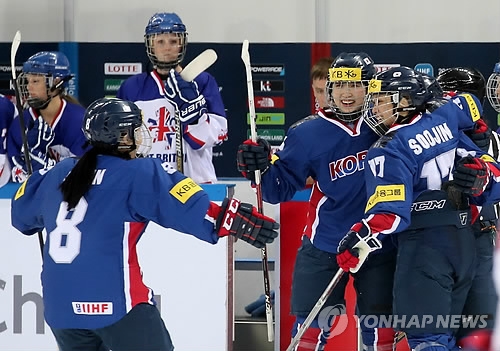 Murray has some injury concerns. Forward Caroline Park has been sidelined with a shoulder ailment, and Danelle Im, who scored once Sunday, is playing with a slight fracture in her right foot. No. 1 goalie Shin So-jung has yet to play because of knee issues.

Backup Han Do-hee has stood tall in the net in Shin's stead and made 19 saves Monday to earn the player of the game honors for South Korea.

To heal some bumps and bruises after playing back-to-back 9 p.m. games, Murray said she'll have "a short and easy practice" Tuesday.

"We're going to give them a lot of free time and not talk too much about hockey or have any system meetings," Murray added. "Basically, we want to recover, because having these late games is really hard on the girls."

South Korea's next game is against Australia at 9 p.m. Wednesday.