The country's consumer price index gained 2.2 percent last month from a year earlier, accelerating from the previous month's 1.9 percent rise, according to the data compiled by Statistics Korea.

The March number marked the highest on-year gain since June 2012. 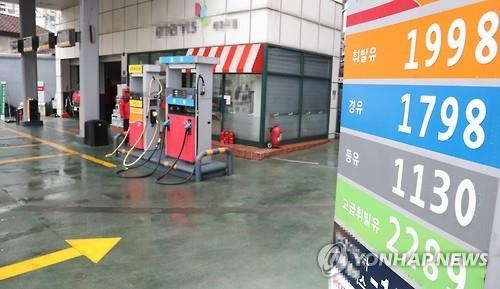 The statistics office said rising gas prices at the pumps and utility bills pushed up the inflation, along with expensive fruits and vegetables.

Prices of gasoline and petroleum products advanced 14.4 percent last month from a year ago amid an upturn in global crude oil prices.

Also, prices of fresh fruit and vegetables jumped 7.5 percent in March from a year earlier following the winter season.

In particular, prices of tangerines surged 106.2 percent on-year last month, with those of cabbage and carrots soaring 91.5 percent and 71.8 percent, respectively.

"The steep inflation is expected to ease in the coming months as the pace of the global oil price hike slowed down to some extent," said Woo Young-jae, director of the price statistics division at the statistical bureau. "And the supply of agricultural products will expand with the spring season coming soon."

South Korea had suffered from low inflation over the past two years amid a low oil price trend. The consumer price index grew 0.7 percent and 1 percent in 2015 and 2016, respectively, failing to meet the central bank target of 2 percent.