SEOUL, April 4 (Yonhap) -- Investments by the country's top 30 conglomerates by assets dropped 18 percent in 2016 from a year earlier, with the top three business groups leading the overall decline, a tally from a corporate tracker showed Tuesday.

The 30 business groups, which control 266 affiliates, invested 60.69 trillion won (US$54.3 billion) in tangible and intangible assets last year, a 13.39 trillion won, or 18.1 percent, drop from a year earlier, according to CEO Score.

Of the difference, 95.6 percent of the amount was due to the top three players -- Samsung, Hyundai Motor and SK -- holding back investments, which dropped a combined 12.52 trillion won.

The tally said 17 of the top 30 conglomerates lessened their investments last year. Hardest hit were investments in physical assets, such as facilities, which fell by 13.85 trillion won, or 20.7 percent on-year. Investments in intangible assets slightly rose 6.1 percent.

The data showed that Hyundai Motor withdrew the most, with a 9.94 trillion-won drop, down 53.4 percent. That was largely because of a some 10 trillion-won purchase of land in southern Seoul to build its new headquarters was reflected between 2014 and 2015. 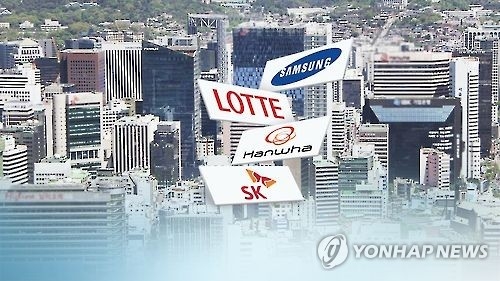