SEOUL, April 4 (Yonhap) -- Presidential front-runner Moon Jae-in's campaign is considering asking the national election watchdog to look into an opinion poll that placed his rival ahead of him in a hypothetical matchup, a spokesman said Tuesday.

Moon, who has maintained a firm lead in nearly all presidential polls, was overtaken by Rep. Ahn Cheol-soo of the centrist People's Party in a survey released by pollster The Opinion on Monday. 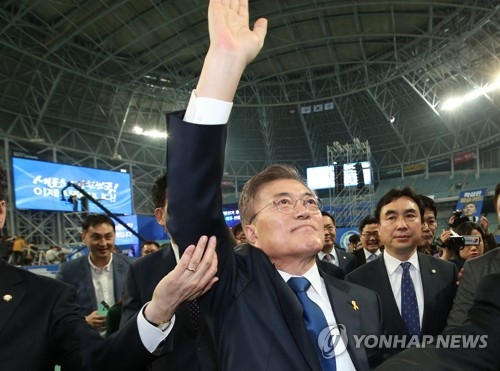 In a hypothetical two-way race, Ahn garnered 43.6 percent against Moon's 36.4 percent. It was the only poll in which Moon trailed Ahn.

"We've asked our legal team to look into the case as there are many people within our campaign who say it should be sent (to the National Election Commission) for a review," Moon's chief spokesman Park Kwang-on said in a phone call with Yonhap News Agency.

He claimed the survey was "biased" because it was conducted only via landline phones and on the Internet, not by mobile phone.

"We think it could be problematic if such survey results are published in the media and disseminated," he said.

The campaign plans to decide whether to send the case to the election watchdog after taking into consideration the opinion of other members who claim it isn't necessary as the public is already aware of the survey's alleged shortcomings.