The donated trees will be planted in Alashan, northwestern China, to improve the air quality and living environment there.

"I happily decided to donate after I heard about fans donating trees. As deteriorating air quality has recently emerged as a serious issue, I sincerely hope these small steps help improve environmental problems," the agency quoted Park as saying.

Meanwhile, he wrote on his Korean fan page Saturday, "Words can't describe how thankful I am for fans' support for the past 11 years. I've believed that good performances are the best way for me to pay back all the love. I will continue to act on that belief."

Park is one of the most popular South Korean stars in China, and is sought after by producers of major Chinese television shows.

He rose to fame in China for his role in the 2011 Chinese drama "Qian Duo Duo Get Married," which became a nationwide sensation. He later starred in three more dramas, including "Far Away Love" that earned him a top acting award in the country. His new series "Man To Man" has drawn much attention from the Chinese media.

He is scheduled to shoot a movie version of "Cheese in the Trap," a popular 16-episode television series on tvN, which aired early last year. 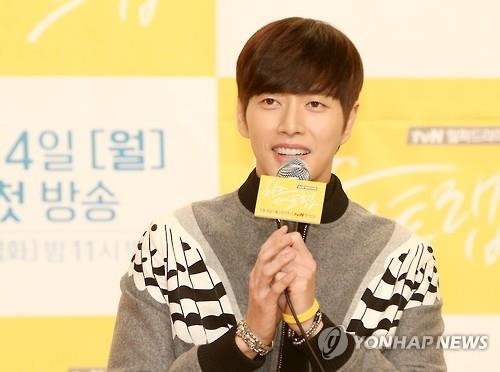