SEOUL, April 4 (Yonhap) -- South Korean boy band BTS, also known as Bangtan Boys, has wrapped up the U.S. leg of its world tour successfully, selling more than 60,000 tickets in the country according to its agency Tuesday.

According to Big Hit Entertainment, which represents BTS, the team performed in front of a combined audience of about 60,000 during its live shows in Newark, Chicago and Anaheim from March 23 to April 2.

The seven-member team, one of K-pop's biggest male groups to date along with EXO, thanked its American fans for their support.

"We were happy to perform in the U.S. and were moved by fans' support and love," the team said.

All shows in America were sold out, while the Chicago gig, which wasn't initially scheduled, was later added due to strong demand. The concerts were also covered extensively by major U.S. media outlets, including the New York Times and Billboard.

BTS is scheduled to continue its world tour in Asia until early July with shows slated for Bangkok, Manila, Hong Kong and six cities in Japan. 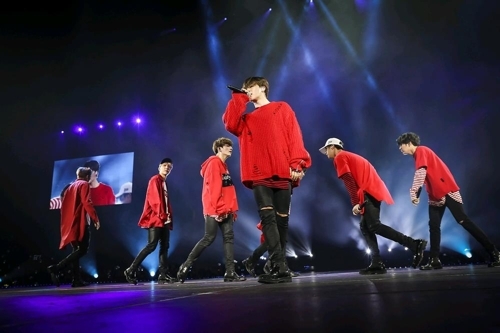