SEOUL, April 4 (Yonhap) -- Hani, a member of South Korean girl group EXID, has uploaded a tiny clip on her social media, which contains footage of EXID members performing choreography moves for the band's new single "Night Rather Than Day," the lead track off the six-song EP "Eclipse," a week ahead of its official release.

She also added a comment saying: "I'll offer a spoiler for those in Leggo(EXID's fan community) who ask, 'Huh? Is EXID turning chirpy now? What in the world would it be like?'"

In the three-second video, the current four-member lineup, without Solji who is currently on hiatus due to hyperthyroidism, wearing outfits all in different colors, showcase a part of the choreography of "Night Rather Than Day," hinting at the visual concept, albeit sans any audio due to the intentionally muted sound.

April 10 marks the coveted rollout of "Night Rather Than Day," the first single to come out since "L.I.E," dropped in June last year.

It didn't even take a full-length video to stir up instant chatter. Hani's experimental self-declared spoiler, actually functioning, let it be said, as a teaser, per se, fuels the "girl power" phenomenon in the K-pop scene, which is likely to still go on this year.

EXID was formed in 2012 only to release a series of unsuccessful singles until it rose to prominence in 2014 as the megahit number "Up & Down" rode a wave of "contraflow sensation," a rare performance the single showed on most of the domestic charts by peaking at No. 1 after its debut and subsequent swift demise on the top 100.

On the cusp of facing the disbandment of the group, propelled by the poor reception to "Up & Down," a "zic-cam," made up of the first syllables of the Korean word for "personally" and the English word "camera," of Hani performing the song on stage blew up online out of the blue. Millions of viewers' initial focus on her statuesque body and suggestive dance moves was soon accompanied by a reassessment of the quality of the song itself.

The song wound up topping the charts and its choreography has been widely covered and parodied, becoming a nationwide phenomenon that year.

If Busker Busker's breakout single "Cherry Blossom Ending" is a "zombie," a moniker given based on its nature of "haunting" the charts every spring season since its debut in 2011, "Up & Down," alongside Hani's zic-cam, more specifically, was basically the 5-year-old band's Noah's Ark.

Given the void to fill with Solji's absence, it still remains open to question if EXID as a quartet will ever be able to make as strong a track as "Up & Down" again. However, the group with nine lives, so much more determined than ever, with "Eclipse" fishing for the spring K-pop marketplace, keeps going as it competes with tens of tough contenders bitten by the same bug. 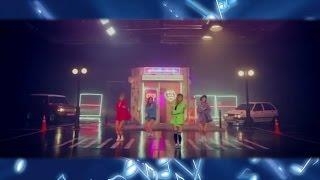 EXID bears down to fill Solji's void with new EP

EXID bears down to fill Solji's void with new EP