Park Won-soon and Sadiq Khan signed the agreement at City Hall in London after they agreed in Paris Wednesday to implement a Global Car Scoring System under which the cities will collect data on car emissions and publish them online as part of efforts to fight climate change and air pollution.

Monday's agreement in London is expected to expand the scope of friendship and cooperation in a December 2015 pact signed between the cities.

Seoul and London also agreed to help each other to make the World Cities Culture Forum in November, to be hosted by Seoul for the first time in Asia, a success.

Initiated by the London mayor in 2012, the forum is a conference for the heads of culture departments of large cities to discuss challenges faced by culture and ways to bring about cultural development. Last year, Seoul joined the forum that currently has 32 partner cities.

Park also invited London as a guest city to the Seoul Biennale of Architecture and Urbanism that the Seoul metropolitan government will host in September, and asked London to take part in WeGO, an international organization of cities to promote e-government in which Seoul holds the chairmanship.

Park expected that he and Khan "will seek to create areas of cooperation to enhance the life of citizens in world cities through mutual exchanges." 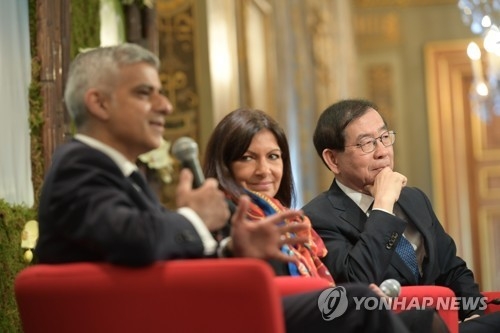