SEOUL, April 4 (Yonhap) -- With the recent surge of digital news consumers, the number of subscribers to printed newspapers has been reduced to one fifth of what its size was two decades ago, a press foundation said Tuesday.

The Korea Press Foundation said in its Korea Press Yearbook 2016 that only 14.3 percent of respondents to its annual survey said they subscribe printed newspapers at home. This is about one fifth of the 69.3 percent that answered positively to the same question in 1996.

The yearbook was based on the survey conducted from June to August last year on 5,128 adults across the country. 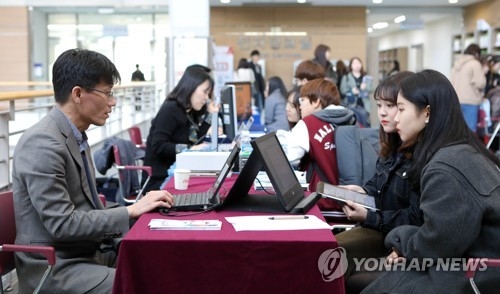 The book showed that the country's newspaper-reading population has also declined sharply.

Only 20.9 percent answered "yes" when asked if they have read printed newspapers in the past week, down 4.5 percentage points from 25.4 percent in 2015.

The declining rates of newspaper-based news consumers and subscribers led to a reduction in the circulation numbers of the media.

According to the Korea Audit Bureau of Certification, 161 dailies across the country had a total daily circulation of about 9.74 million copies in 2015. The comparable figures for 2010 were 141 dailies and 11.05 million copies.

The reports ascribed the declines to the recent rise in the number of people who access news on mobile devices or Internet-connected PCs.