GANGNEUNG, South Korea, April 4 (Yonhap) -- As is the case with many other things related to North Korea, very little was known about the women's hockey team of the reclusive regime prior to the world championships in South Korea.

After two games at the International Ice Hockey Federation (IIHF) Women's World Championship Division II Group A -- both of them losses -- at least one thing has become clearer.

North Korea hasn't justified its No. 26 ranking, any way you cut it. 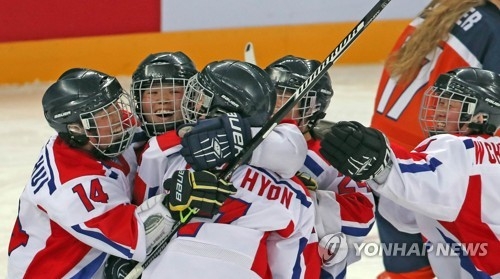 North Korea opened the tournament with a 2-1 loss to the 28th-ranked Australia on Sunday, and then blew a 2-1 lead to drop to the 19th-ranked Netherlands 4-2 the following day.

North Korea outshot Australia 32-19, but those numbers don't tell the whole story. Most of those shots were of the weak variety that didn't really challenge Michelle Coonan in net. The North Koreans generally looked sluggish and out of sync. They lost by one goal only because Australia wasn't all that much better at its offensive end.

In sum, it was an underwhelming contest by the two lowest-ranked nations in the six-team tournament, which also features host South Korea (No. 23), Britain (No. 21) and Slovenia (No. 24).

The North Koreans came out with a little more bounce in their steps against the Netherlands, and even rallied from an early 1-0 deficit to lead 2-1 in the second period. 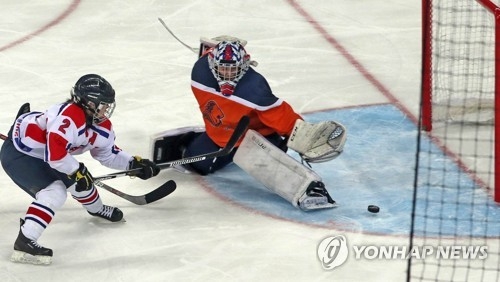 The advantage evaporated quickly as the Dutch came back with three unanswered goals and handed North Korea its second straight loss. North Korea at least put up a better fight than it did against Australia, but couldn't sustain that pressure.

The players' conditioning appears to be the main reason, and it shouldn't come as a surprise, with North Korea having long dealt with food shortages and health problems.

Smallish in stature, the North Korean players got knocked around for the most part in their first two games, and some players fell to the ice even when they initiated contact.

Head coach Ri Won-son has been riding his top dogs hard, and his reliance on the few decent players has only exposed the team's lack of depth.

Against Australia, the three first-line forwards Kim Un-hyang, Jin Ok and Choe Jong-hui combined for 12 of the team's 32 shots. The top defensive pairing of Won Chol-sun and Kim Nong-gum, who was named the best North Korean player of the game, had eight shots between them.

In the next game, those five players had 11 of the team's 19 shots. The three forwards also took more than half of the face-offs.

Players on the third and fourth lines have played quite sparingly, and have been virtually invisible in the few minutes that they've been on the ice.

Kim Nong-gum and Won Chol-sun have been the team's two best players so far. Both have logged heavy minutes, as they've played in every situation -- even-strength, power plays and penalty kills. They can at least hold their own at both ends, but two defensemen can only do so much for a team without help from other skaters. 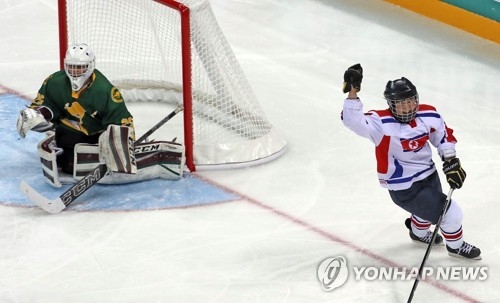 North Korea will face host South Korea in a highly anticipated showdown at 9 p.m. Thursday. It is a game with many implications, given the current climate on the peninsula and the recent history of diplomatic friction between the two. For all the hype surrounding the matchup, though, the game could well end in a lopsided victory for South Korea, which has been far more impressive than North Korea in winning its first two games.

"We just know that they have a different roster than last year (for the world championships)," Murray said Sunday. "We don't really know what to expect from them. We haven't seen this new North Korean team."

Murray guessed that North Korea perhaps brought in eight to 10 new players from a year ago. The turnover isn't actually quite that dramatic, as North Korea changed four players from last year's 18-deep squad.

New or old, the players haven't said anything about their team. The South Korean media have gotten the silent treatment from the North Korean players in the mixed zone after two games. In their stead, Han Ho-chol, listed as a team manager, has delivered the exact same message each time.

"We'll try to be better next time," Han said. 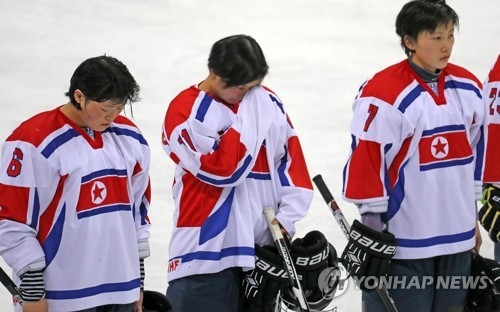 N. Korea not living up to world rankings at women's hockey tourney in S. Korea

N. Korea not living up to world rankings at women's hockey tourney in S. Korea