SEOUL, April 4 (Yonhap) -- Prosecutors said Tuesday they summoned a former presidential secretary to undergo questioning as a suspect this week over a string of allegations surrounding a corruption scandal that led to the removal of former President Park Geun-hye from office.

Prosecutors summoned Woo Byung-woo, senior presidential secretary for civil affairs from 2015 to 2016, to appear at the prosecution on Thursday 10 a.m., they said.

Woo is suspected of aiding and abetting Choi Soon-sil, a longtime friend of Park, in meddling in state affairs and disrupting a special presidential inspector's investigation into the scandal. Park was arrested last Friday over her involvement in the scandal.

Woo is also accused of allegedly using his influence to block a prosecution probe into failed rescue efforts during the 2014 sinking of the Sewol ferry that killed 304 people.

Prosecutors also suspect that he peddled influence in appointments and inspections of government officials.

It will be the third time for the former presidential secretary to be questioned by investigators, following one by prosecutors last year and another by an independent counsel team in February.

The independent counsel team that looked into the scandal sought the arrest of Woo, but a district court refused, saying the allegations raised are debatable. Woo has denied any wrongdoing. 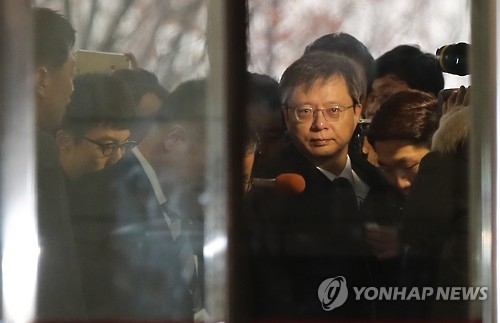 (LEAD) Prosecutors to grill ex-presidential secretary over scandal this week

(LEAD) Prosecutors to grill ex-presidential secretary over scandal this week