(ATTN: UPDATES with reorts of Moon's visit to the grave of late President Roh Moo-hyun in Gimhae, remarks from Moon: ADDS additional photo)

Moon, who won the nomination of the liberal Democratic Party a day earlier, visited a national cemetery in Seoul to pay tribute before the tombs of former Presidents Syngman Rhee, Park Chung-hee, Kim Dae-jung and Kim Young-sam. 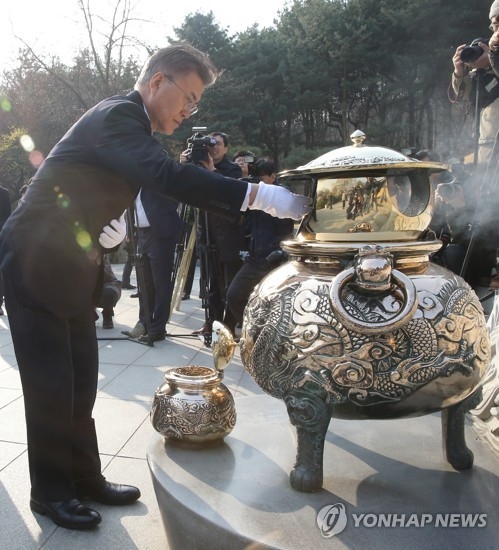 In South Korea, it is customary for politicians to visit the graves of past leaders to mark the start of a new journey. Some politicians, however, choose to honor only those whose legacies they see fit to respect.

"I made a promise with myself to achieve national unity in a just manner on the foundation of fairness and justice," Moon told reporters after visiting the graves of all past presidents.

"The Republic of Korea has many deep-rooted evils in the shadows of its rapid growth, and our people recently saw the bare face of those deep-rooted evils," he said, referring to a massive corruption and influence-peddling scandal that led to the ouster of President Park Geun-hye last month. The impeachment triggered an early election on May 9. 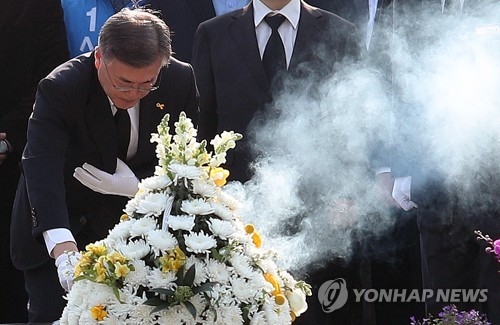 Later after visiting the grave of his political mentor, late former President Roh Moo-hyun, in Gimhae, 449 kilometers south of Seoul, Moon said he will work to build a nation for the people.

"Through the presidential election, a regime change at the election and through the administration of state affairs afterwards, I will take another step closer to (building) a world for the people," he said.

"I will do my utmost to commemorate the short-lived dreams, spirit and values of President Roh," he added.

Moon and Roh had been colleagues while working as human rights lawyers. Moon served as Roh's presidential secretary and chief of staff throughout most of the former president's 2003-2008 presidency.