Hwang made the remarks during a Cabinet meeting amid reports that Pyongyang has been seen preparing for what could be its sixth nuclear test, which experts fear could bring it closer to its long-cherished goal of becoming a nuclear power.

"Our government and the international community would never just sit down and watch North Korea's reckless ambitions to be recognized as a nuclear power," the acting president said. 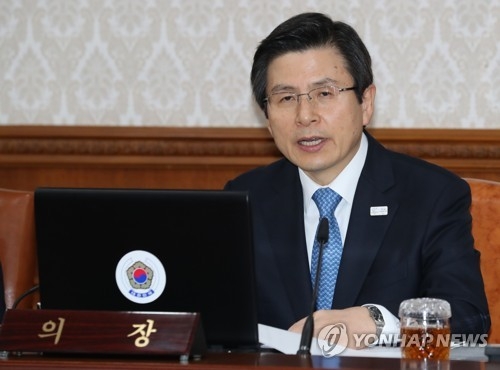 Hwang, in particular, pointed out that to maximize the political impact of its saber-rattling, the North is highly likely to undertake strategic provocations such as a nuclear test during the upcoming high-profile events.

They include the U.S.-China summit from Thursday to Friday, the North's parliamentary session next Wednesday, the 105th anniversary of its founder Kim Il-sung's birthday next Saturday and the 85th anniversary of the foundation of its Korean People's Army on April 25.

Hwang instructed the government to mobilize "all available military and diplomatic means" to prepare against the North's possible provocations.

"(The government) has to stand ready to sternly respond militarily, diplomatically and economically should the North set off provocations," he said.

Hwang, in addition, stressed the need to maintain close cooperation with the international community, particularly its security ally the United States, to ramp up pressure on Pyongyang to have it change tack towards denuclearization.