Choo Shin-soo of the Texas Rangers went 1-for-4 against the Cleveland Indians on Monday (local time) at Globe Life Park in Arlington, Texas. The Rangers wasted an early 5-1 lead and fell 8-5 to the defending American League champions.

Batting second as the designated hitter, Choo got his only hit of the game against Boone Logan with two outs in the bottom of the seventh.

He had gone 0-for-3 against Cleveland starter Corey Kluber before that.

For the Baltimore Orioles, Kim Hyun-soo started in left field and batted seventh, going 0-for-3 against the Toronto Blue Jays at Oriole Park at Camden Yards in Baltimore. 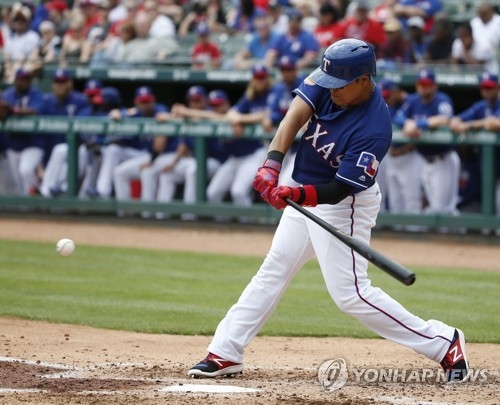 Kim hit into three groundouts before getting lifted for Joey Rickard in the top of the eighth.

The Orioles walked off on the Jays 3-2 on Mark Trumbo's solo blast in the bottom of the 11th.

Choo and Kim are the only two South Korean position players on the big league roster. Park Byung-ho of the Minnesota Twins, Hwang Jae-gyun of the San Francisco Giants and Choi Ji-man of the New York Yankees have started the season in the minors.

Pittsburgh Pirates infielder Kang Jung-ho, who has received a suspended jail term for driving under the influence of alcohol, has yet to join the team, after his U.S. visa application was rejected. The Pirates have placed him on the restricted list, which is for players who are unable to play for noninjury reasons, such as arrests or family matters. Kang will not be paid or earn major league service time while on this list.