SEOUL, April 4 (Yonhap) -- South Korea and Kenya have discussed ways to step up their collaboration on a range of economic issues, including investment and trade, the foreign ministry said Tuesday.

The officials examined the status of trade, investment and other economic ties between South Korea and Kenya, it said. Kenya is South Korea's biggest trading partner in the East African region and a traditional ally whose economy posts over 6 percent growth every year.

They also delved into how South Korean companies could take part in Kenya's national economic development plan known as "Vision 2030," especially in the sectors like energy, science technology, transport and infrastructure building, according to the ministry.

Under the development plan, Kenya seeks to push its annual economic growth to 10 percent and join the ranks of developed countries by 2030.

During the meeting, the two sides also agreed to share the South Korean government's skills of running an electronic government with Kenya and provide South Korean assistance to nurture Kenyan professionals in the nuclear energy and health sectors.

South Korea and Kenya have maintained close cooperative relations since they officially established diplomatic ties in 1964 and Lee's latest visit to the country would mark a step forward for South Korea's efforts to diversify its diplomacy into the African region, the foreign ministry noted.

The South Korea-Kenya joint economic committee was launched in 1978, and the previous third round of the meeting was held in Seoul in November 2015. 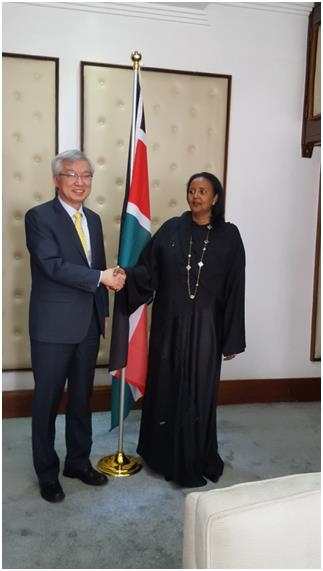