SEOUL, April 4 (Yonhap) -- Asiana Airlines Inc. said Tuesday it will increase flights on routes to Japan and Southeast Asia in the second quarter to offset lower demand from China.

Asiana, the country's second-biggest passenger carrier by sales, will flexibly respond to sharp declines in inbound Chinese travelers by reducing flights on routes to and from China, the company said in a statement.

"From April to June, we will explore fresh demand from Japan and Southeast Asian countries by offering more flights to the areas," an Asiana official said.

"We will continue to monitor the situation and take necessary steps to minimize any impact from the decreasing travel demand from China (on our bottom line)."

The company plans to inject the wide-body Airbus A330 aircraft, as well as Boeing B767 and B747 jets, which are larger than the existing A321 jets currently available, on routes to Japanese cities and Southeast Asian countries, the statement said.

The carrier will also increase flights on the U.S. and European routes, it said. 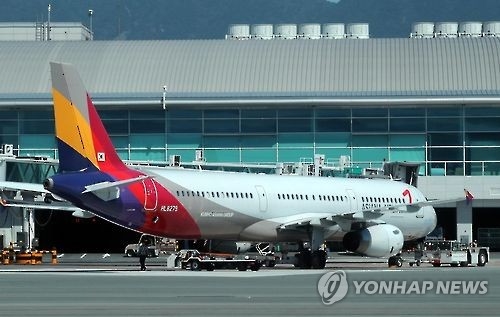 Korean Air Lines Co., the country's biggest carrier, already took similar steps a month ago as China was set to impose further economic sanctions on Korean businesses amid an ongoing diplomatic row between Seoul and Beijing over the installation of an advanced U.S. anti-missile system known as the Terminal High Altitude Area Defense here.

China has explicitly opposed the THAAD deployment, arguing the system could be used against it. Seoul and Washington countered that the system is only aimed at defending against nuclear and missile threats from North Korea.

Asiana to cut fleet on China routes amid THAAD row

Asiana to cut fleet on China routes amid THAAD row