Abe met with Ambassador Yasumasa Nagamine, who will return to Seoul later in the day after being recalled nearly three months ago in response to Korean civic groups erecting a statue of a girl symbolizing the sexual slavery victims in front of its consulate in the southern South Korean port city of Busan.

Nagamine was quoted by NHK as saying during the meeting in Abe's office, "I will make utmost efforts to fulfill the present task," indicating he will try to ensure the current and next South Korean governments carry out the obligations under the deal struck on Dec. 28, 2015, and get the statue removed.

Nagamine is expected to come back to Seoul, along with the Japanese Consul General in Busan Yasuhiro Morimoto, who was also recalled over the statue dispute. 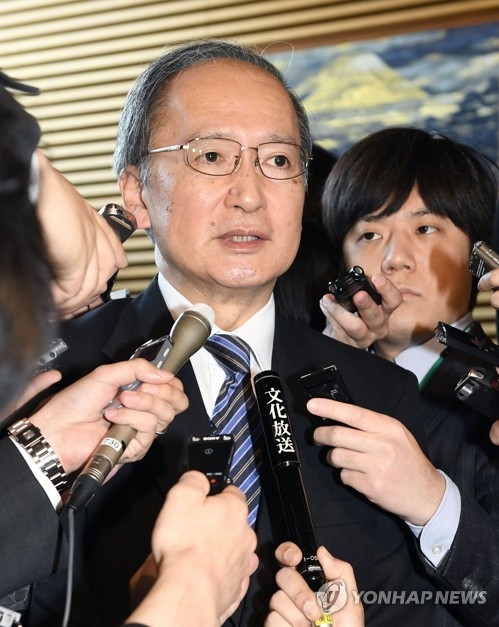 Tokyo claimed that the statue built before its consulate, along with another one standing in front of its embassy in Seoul, runs counter to the Seoul-Tokyo deal, while Seoul has called for an appropriate solution to the dispute over the statue but veered off from making a promise to get it removed or moved to another place, saying that it is not in its purview to do so since the statue was built by civic groups.

Asked about how he will demand Seoul implement the deal, Nagamine said he is arranging a meeting to hold talks with South Korean Prime Minister Hwang Kyo-ahn, who is also serving as the acting president, about the issue.

Nagamine said prior to his meeting with Abe he paid a courtesy call on Japanese Chief Cabinet Secretary Yoshihide Suga, who instructed him to make every effort to demand the next South Korean government inherit the 2015 deal.

South Korea is set to hold a presidential election on May 9 following the impeachment of former President Park Geun-hye. Some major presidential candidates have hinted at renegotiating the deal.

South Korea's foreign ministry reiterated its position that it will "faithfully" carry out what was agreed upon between the two countries and that it is important for all parties involved to respect the spirit of the deal.