SEOUL, April 4 (Yonhap) -- South Korea's Supreme Court on Tuesday ordered the state to pay compensation to a suspect for forcing him to wear handcuffs and be tied with a rope during questioning by a prosecutor.

The ruling came after Lee Young-chun, a former head of the militant Korean Confederation of Trade Unions' regional chapter in Goyang and Paju, north of Seoul, launched a lawsuit in May 2015, claiming he was forced to wear handcuffs and be bound with a rope against his will while being grilled by a prosecutor at the Suwon District Prosecutors' Office. 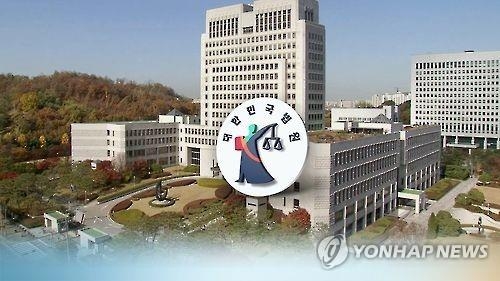 Lee was put under arrest at that time on charges of violating the National Security Law.

Upholding two lower courts' decisions, the Supreme Court ruled that the state and the Suwon prosecutor should together pay a compensation of 1 million won (US$890) to Lee.

In the lawsuit, Lee said he asked to have his handcuffs removed during the first questioning but the prosecutor refused. In the second questioning, the prosecutor was accused of even tying up the handcuffed Lee with a rope.

The prosecutor, who has since moved to another district prosecutors' office, countered, saying he had no choice but to use handcuffs and a rope for Lee, as one of his accomplices attempted to hurt himself during prior questioning.

The current law allows the use of handcuffs and other equipment if the danger of suicide or self-injury exist.

But the court said an attempted self-injury by a suspect cannot justify the use of handcuffs and rope for his or her accomplice because the existence of such dangers is unclear in the case.

In 2005, the Constitutional Court ruled against forced application of handcuffs, ropes and other equipment to detained suspects during questioning by prosecutors.

State ordered to compensate suspect over forced use of handcuffs

State ordered to compensate suspect over forced use of handcuffs