SEOUL, April 4 (Yonhap) -- South Korea is planning to reduce the number of traffic fatalities to under 4,000 this year by applying stricter rules and improving infrastructure, the transport ministry said Tuesday.

The government will strengthen traffic laws and crackdown on drunk driving and other violations of traffic rules. Moreover it plans to build or upgrade the infrastructure that ensures the safety of pedestrians on the roads, the Ministry of Land, Infrastructure and Transport said in a statement.

As of 2014, South Korea reported an average of 2 traffic fatalities per 10,000 vehicles, which is higher than the average of 1.1 for all 34 Organization of Economic Cooperation and Development (OECD) member countries, it said. 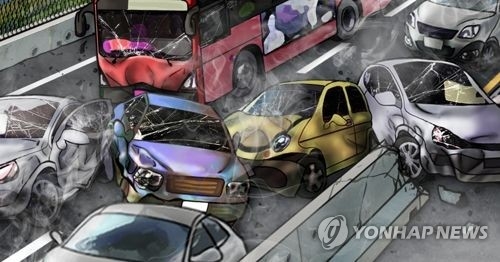 S. Korea aims to cut traffic deaths to below 4,000 this year

S. Korea aims to cut traffic deaths to below 4,000 this year