"To launch those missiles from under the water is very, very complicated," Adm. Scott Swift, who commands the U.S. Pacific Fleet, said in an interview. "I think it's still years away before that technology is developed."

He cited what the U.S. military has "seen and knows" but would not specify the grounds of his assessment.

The admiral stressed the seriousness of the North's general ballistic missile capability coupled with its nuclear program. It has carried out five known underground nuclear tests and stated the goal of miniaturizing nuclear bombs to fit on to various types of missiles in stock.

"That's what main concern is," he said, speaking at a meeting with a small group of reporters at the U.S. military base in the Yongsan district of Seoul on his third trip here as the leader of America's naval forces in the Pacific. 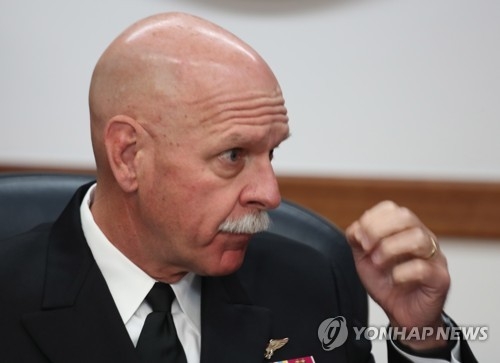 His remarks indicated the Pentagon's move to focus, for now, on countering growing threats from nuclear and ground-based ballistic missiles, rather than being distracted by the Kim Jong-un regime's possible bluff.

Last year, the North's media announced the success of a ballistic missile launched from a submarine, releasing some photos of the experiment.

Swift reassured South Korea and other allies about the U.S. security commitment to Asia under the Donald Trump administration.

Aides to Trump have distanced themselves from the Barack Obama administration's policies to "pivot" or "rebalance" to Asia.

It does not mean an end to the U.S. focus on the defense of Asia itself, and the Pentagon maintains a plan to deploy 60 percent of U.S. naval assets to the Asia-Pacific area by 2020, the admiral said.

There has been no change to any guidance from Washington for him and Adm. Harry Harris, the commander of the U.S. Pacific Command, he added.

"We are still being robustly resourced and we will remain committed to the whole Indo-Asia-Pacific region," he pointed out.

He added that probably 57 or 58 percent of U.S. naval firepower was already positioned in the theater.

Swift said his fleet plans to introduce more strategic and most modern weapons, including the USS Zumwalt (DDG-1000), a guided missile destroyer designed as a multi-mission stealth ship with a focus on land attacks.

He was cautious about South Korean media reports that a Zumwalt-class destroyer may be ported in the country's naval base in the southern island of Jeju.

In a meeting with Adm. Harris, who heads the Pacific Command, in Hawaii earlier this year, some South Korean lawmakers proposed the deployment of the American Navy's newest destroyer there. They later told media that Harris showed a positive response, if not a clear yes.

"As a naval officer, I think it is little premature to discuss what the future plans are" for Zumwalt, said Swift.

He said it would take several years to complete the weapon systems of the "very unique" ship and decide on the details of its tactical use after testing. The U.S. Navy plans to have only three Zumwalt destroyers deployed.

Asked about the likelihood of the state-of-the-art warship being deployed in or near South Korea in the future, he said, "Anything is possible."

He also did not rule out the possibility of sending more high-profile warships to East Asia in addition to the two nuclear-powered super carriers, USS Carl Vinson and the USS Ronald Reagan, in Japan.

"There might be three sometimes, there might be four," he said. "One of the great advantages of naval power is its flexibility to deploy."

The challenge, though, is the capacity of the facilities that the Pacific Fleet has for maintaining and sustaining warships, he said.

The admiral has commanded the Hawaii-based Pacific Fleet for nearly two years. He describes his troops as the "most capable, ready and significant naval force in the world."