SEOUL, April 4 (Yonhap) -- The presidential nominee of the centrist People's Party is a maverick lawmaker whose strong determination to go it alone in fighting the establishment has propelled him from a soft-spoken entrepreneur to a formidable challenge to front-runner Moon Jae-in.

Before entering politics five years ago, Ahn Cheol-soo, 55, was a successful businessman who inspired many young South Koreans with his innovative entrepreneurship and clean and upright image. 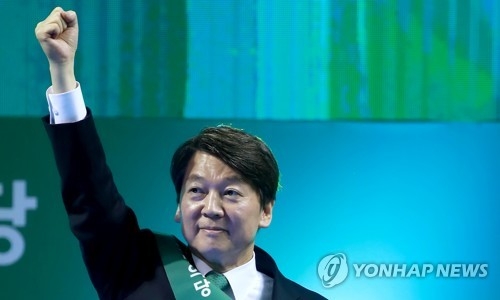 The former medical doctor was credited with contributing to South Korea's growth into a global IT leader and earned the nickname "Bill Gates of Korea." Youngsters sought him out as a role model for creativity and a benchmark CEO.

Ahn rose to prominence after appearing on a hit variety show in 2009. He then widened his appeal by co-hosting a series of talk shows across the nation to discuss a wide range of social issues, including college tuition fees and jobs, which struck a chord with the young.

In 2011, Ahn emerged as a potential candidate in the by-election for Seoul mayor, but he surprised those in and outside the political circle by declaring his support for then-lawyer Park Won-soon without preconditions.

Park, an underdog, won the election, which was seen as a demonstration of Ahn's political influence.

In 2012, Ahn received growing calls to run for president on the opposition ticket, and in September, he threw his hat into the ring as an independent, making his catchphrase "new politics" a buzzword for the election year.

However, Ahn's reformist mantra took a hit as talks got under way to form a coalition with Moon Jae-in of the then main opposition Democratic United Party.

The two sides wrangled over how they would merge their candidacies, leading Ahn to eventually declare his support for his rival and withdraw from the race. Moon lost the election to Park Geun-hye of the then ruling conservative Saenuri Party.

After a period of soul-searching, Ahn made a comeback the following April by winning a parliamentary seat in Seoul. In 2014, he co-founded the liberal New Politics Alliance for Democracy with members of the former Democratic United Party, but resigned as co-chair several months later to take responsibility for its defeat in a parliamentary by-election.

Following Moon's election as party chair, Ahn made repeated calls for intra-party reform, but when his demands were not met, he bolted from the party at the end of 2015.

He launched the People's Party in 2016, but immediately came under pressure to join forces with Moon's party ahead of the general election in April. Ahn dismissed the calls and led his party to win 38 out of the 300 seats up for grabs. The party also ranked second in terms of preferred party with 26.74 percent of the vote.

Despite the party's unexpected success, Ahn soon stepped down from his post as co-chair amid allegations two of the party's lawmakers received illegal political funds ahead of the election.

In the same election, Ahn won re-election in his district in Seoul and continued to push for his party's independence from either the conservative or liberal camps.

His determination to build a new and separate political force is believed to have appealed to voters disillusioned with both ends of the spectrum.

Ahn was born in the southeastern port city of Busan in 1962. He has a bachelor's, master's and doctorate degree in medicine from Seoul National University and is a graduate of the University of Pennsylvania. He is married with one daughter.