SEOUL, April 5 (Yonhap) -- After South Korea displayed a mediocre performance against China and Syria in the 2018 FIFA World Cup qualifying campaign last month, the Korea Football Association (KFA) was put in a dilemma over whether to dismiss or keep men's national team head coach Uli Stielike.

While avid football fans called for Stielike's head, the KFA technical committee, which reserves the rights to hire or fire national team coaches, announced on Monday that the German will remain at the helm, a decision that now puts the nation's football governing body in the hot seat.

"We've decided to trust Stielike once more," Lee Yong-soo, who leads the KFA technical committee, said at a press conference. "I don't think it's right to judge Stielike by one or two matches."

Following the technical committee's decision, fans here lashed out online at the KFA, making comments like "The KFA has abandoned South Korean football," and "Let's skip the 2018 World Cup and start preparations for the 2022 World Cup."

Some pundits said the decision was somewhat surprising considering that the KFA has been sensitive to public sentiment when it comes to the World Cup qualifier. 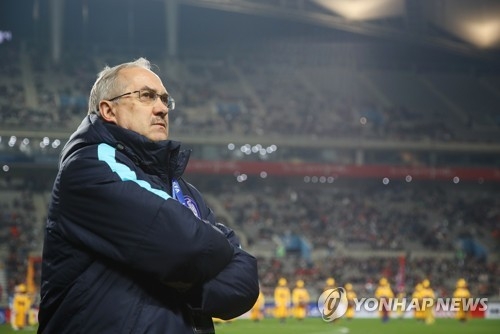 South Korea, the 2002 World Cup semifinalists, have not missed the top FIFA competition since 1986. The KFA adopted a full-time managing system for the national team in 1992, and since then, only two head coaches -- Kim Ho and Huh Jung-moo -- have guided the team from the qualifying stage to the World Cup finals without getting sacked.

In 1998, the KFA even axed then-head coach Cha Bum-kun before the team completed the World Cup group stage after South Korea were demolished 5-0 by the Netherlands. History showed the KFA has not been afraid of changing coaches, but this time it wasn't the case.

"I think the KFA officials decided to give Stielike one more chance, because there's no solid backup plan if they fire him," said Kim Hwan, a football commentator at local cable channel JTBC. "I still think the KFA lost the 'golden time' to replace Stielike, but for now we have to respect the decision."

Frustrated fans and local media have recently rolled out names like former Leicester City manager Claudio Ranieri or former Sevilla boss Juande Ramos as replacements for Stielike, but it is merely a wish list.

South Korean national under-20 football team head coach Shin Tae-yong, who was previously assistant to Stielike, was mentioned as the realistic candidate for the senior team skipper. The 46-year-old, however, said Monday he is not interested in the job and his main focus is on leading the young squad at the U-20 World Cup, which will be staged in South Korea from May 20 to June 11.

"I think Shin could take the job if he wants it, but it's too risky (for his career)," Kim said. "We saw how Hong Myung-bo did in 2014 after he was pushed to lead the national team."

Hong was the hottest South Korean coach after he led the under-23 team to a bronze medal at the 2012 London Olympics. He was appointed as the national team head coach after South Korea qualified for the 2014 FIFA World Cup in Brazil, but took a hard beating after his side was eliminated in the group stage with one draw and two losses. 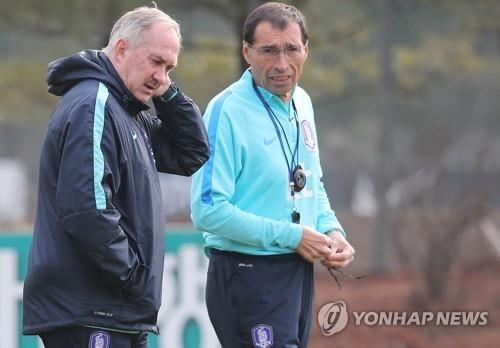 Those who defend the KFA's decision point out that the national team is still alive in the hunt for the World Cup spot and it's not easy for someone to make big improvements if they take the coaching job at this moment, no matter who they are.

With three matches remaining in the final Asian qualifying round for the 2018 World Cup, South Korea are currently in position to grab the ticket to the FIFA competition. The Taeguk Warriors have 13 points from four wins, one draw and two losses, four points behind leader Iran and one point above No. 3 Uzbekistan.

Only the top two teams in the six-team group directly advance to the World Cup in Russia, while the third-place team must go through playoff rounds to enter the world football's showpiece event.

The KFA's recent decision will allow Stielike to extend his record for being the longest-tenured boss ever for the South Korean men's team. He first took the job in September 2014 after signing a contract that runs through the 2018 World Cup, should South Korea qualify for the tournament.

Stielike was once hailed as "God-tielike" by fans after he guided South Korea to the runners-up finish at the Asian Cup and the East Asian Cup in 2015. He still had fans' trust in the second round of the Asian qualifying for the 2018 World Cup last year, as South Korea posted a flawless record with eight straight wins.

Stielike, however, found himself in hot water after his team entered the final round. After posting two nail-biting wins at home against China and Qatar, a 1-0 loss to Iran in Tehran raised doubts about Stielike's coaching ability.

South Korean fans finally exploded when the national team fell 1-0 to China on March 23, which was only South Korea's second defeat to the Asian neighbor in 32 meetings. Stielike managed to collect a 1-0 victory against Syria at home five days later, but fans here still weren't satisfied.

"It's true that the players didn't perform well in the last two matches, but it's the coach who is responsible for sending those players to the pitch," said Hahn June-hea. "Stielike said he did make tactical changes, but really it wasn't something new or special." 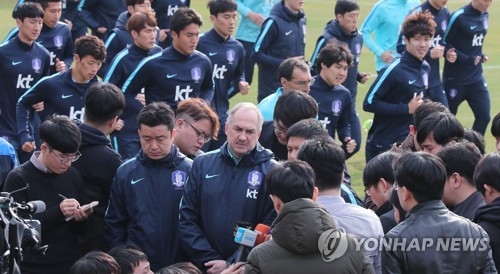 Football critics said in order for the KFA's gamble on Stielike to work, the coach himself needs to make adjustments from his player selection to relationships with media.

Stielike has been criticized for overlooking the top performer in the K League Classic, the country's first division football league. Against Syria, he played forward Hwang Ui-jo, who had not scored a goal with second division club Seongnam FC this season.

"The KFA mentioned that South Korea just need longer time to train, but I don't think that's the main reason for the team's poor performance," said Kim from SPOTV. "If you see Stielike's interview, he often defends himself, but doesn't really think about team chemistry."

What may alleviate South Korean fans' concerns is that the KFA have declared that the national team is in a "state of emergency." The technical committee said it is willing to hire a chief assistant coach who can help Stielike setting up strategies and team operations.

Choi Kang-hee, who previously led South Korea to qualify for the 2014 FIFA World Cup, said it's finally up to Stielike who can clean up the mess and regain fans' support.

"It's the head coach's job to change the atmosphere of a team," said Choi, who now coaches South Korean pro club Jeonbuk Hyundai Motors. "I don't think a team will improve if a leader insists to stay with his strategies of the past. A coach needs to accept tactical advice and understand the characteristics of the players." 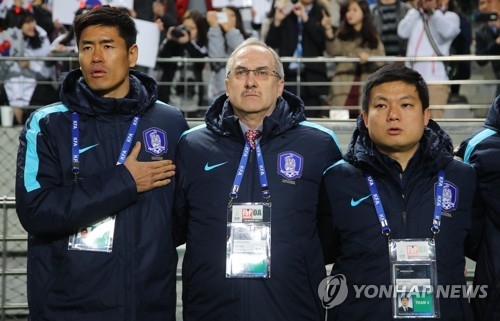