Ahn, a co-founder and former leader of the party, won 85.37 percent of the vote in the last round of the party's primary in Daejeon, 164 kilometers south of Seoul, to emerge the winner with 75.01 percent of all ballots in the in-house contest.

He was trailed by former opposition leader Sohn Hak-kyu with 18.07 percent and Deputy National Assembly Speaker Park Joo-sun with 6.92 percent. 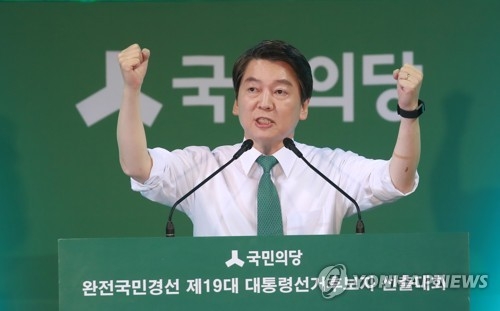 "The time for Ahn Cheol-soo has come. The coming of Ahn Cheol-soo's era means the passing of Moon Jae-in's," the nominee said in his acceptance speech at a Daejeon gymnasium.

Ahn and Moon competed for liberal votes in the 2012 presidential race before the former dropped out in support of his rival. In this year's campaign, the once soft-spoken entrepreneur has launched a searing offensive against Moon.

"We must overcome factionalism and hegemonism," Ahn said in remarks apparently aimed at Moon. "The time for national integration has come and the time for hegemonism is passing. I will achieve a better change of government."

If elected, the two-term lawmaker pledged to serve only the people and lead the nation into a new future marked by the technology-driven fourth industrial revolution.

"This nation is neither the land of the liberals nor that of the conservatives. It is the land of its people," he said.

The party announced the results after combining all on-site votes with the results of a two-day opinion survey by an 8:2 ratio. Tuesday's primary also covered the nearby city of Sejong and the surrounding Chungcheong provinces.

Ahn's victory was widely expected after he swept all six previous rounds. His nomination completes the lineup for the May 9 election that comes in the wake of the ouster of President Park Geun-hye last month.

Ahn's nomination draws him into what many observers expect to be a two-way race with Moon. It is also expected to accelerate talks among a wide range of political forces for a possible merger of candidacies aimed at toppling the most favored candidate from the largest party.

According to the latest poll by Realmeter, Moon maintained his lead for the 13th consecutive week with 34.9 percent but faced a growing challenge from Ahn, who jumped 6.1 percentage points to 18.7 percent.

"I will not pursue an engineered alliance formed by politicians, an alliance that pardons the anti-impeachment forces nor one that is created only to oppose a certain person," Ahn said. "Only an alliance by the people is the true path to victory." 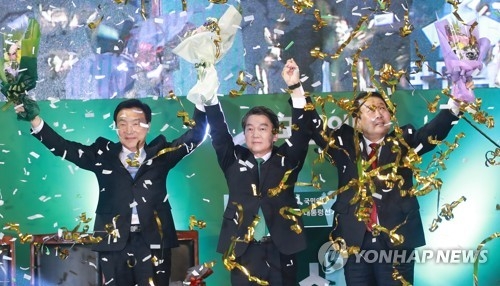