WASHINGTON, April 4 (Yonhap) -- The commander of the U.S. Strategic Command said Tuesday that North Korea is what he's concerned about "most nights" because it's hard to predict what the communist nation will be doing.

Air Force Gen. John Hyten, commander of the U.S. Strategic Command, told a Senate Armed Forces Committee hearing that Russia represents the "greatest threat" to the U.S., but the actions of Russia as well as China are predictable, compared with the North.

"What I'm concerned about most nights is North Korea ... I'm not sure exactly (what) they're going to do tonight," Hyten said. "Every time there's a launch, February 11th, March the 5th this year, the whole network comes up, we bring the entire power of my command to bear on the problem."

Hyten stressed that whatever action the U.S. takes should be in line with allies South Korea and Japan because the North's in the backyard of the allies.

He also said he's ready to provide "military options" to the president "if he deems in association with Congress that there's something that we have to do." He added, however, that he believes any solution to the North Korean problem should involve China.

"I can't see a solution that doesn't involve China," he said. "China is the definition of North Korea's backyard. And so the trade that North Korea has really goes north across the Chinese border and south from China into North Korea. That is a significant element." 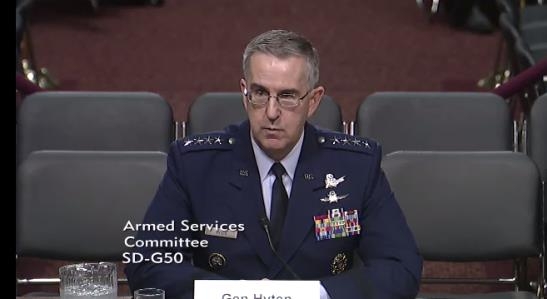 U.S. commander: N. Korea is 'what I'm concerned about most nights'

U.S. commander: N. Korea is 'what I'm concerned about most nights'