WASHINGTON/SEOUL, April 5 (Yonhap) -- A bipartisan group of U.S. senators on Tuesday urged President Donald Trump to use his upcoming summit with Chinese President Xi Jinping to bring an end to "unwarranted and unfair" retaliatory measures Beijing has taken against South Korea for hosting the U.S. THAAD missile defense system.

A total of 26 senators, led by Dan Sullivan (R-AK) and Benjamin Cardin (D-MD), made the appeal in a joint letter to Trump just two days before he is set to host China's Xi for high-stakes talks expected to cover all-important security and economic issues, including the North's nuclear and missile threats.

The Trump-Xi meetings, set for Thursday and Friday at Trump's Mar-a-Lago resort in Florida, will also be watched closely as to whether the U.S. stands up to China for bullying South Korea for hosting a THAAD battery, designed to defend against missile threats from North Korea.

"While China continues to aggressively oppose a missile defense system on the Korean Peninsula, China has done little in recent years to slow or halt North Korea's missile and nuclear programs — the only reason this system is needed," the senators said in the letter.

"Mr. President, we hope you will call upon President Xi to reexamine his view of the THAAD deployment and encourage his country to cease its unwarranted and unfair economic retaliation against South Korea," they said.

They also said China should use its "considerable influence" over Pyongyang for the North's denuclearization.

"As President Xi knows well, THAAD is a defensive missile system critical to protecting the Korean people and, just as importantly, the tens of thousands of American troops and their families stationed in Northeast Asia from evolving North Korean capabilities," the senators said.

"In your discussions with President Xi, we hope you will underscore that the United States and the Republic of Korea's joint decision to deploy THAAD is entirely a result of North Korea's continued aggressive behavior," they said.

South Korea's foreign ministry viewed the latest U.S. senators' action toward China's retaliation against the THAAD deployment as "very meaningful" in that it came right ahead of the summit and that it directly urged President Trump to send a "clear message" on that issue when he meets the Chinese leader.

The ministry added that the Seoul government will continue to prepare diverse countermeasures and take necessary steps in close coordination with the U.S. 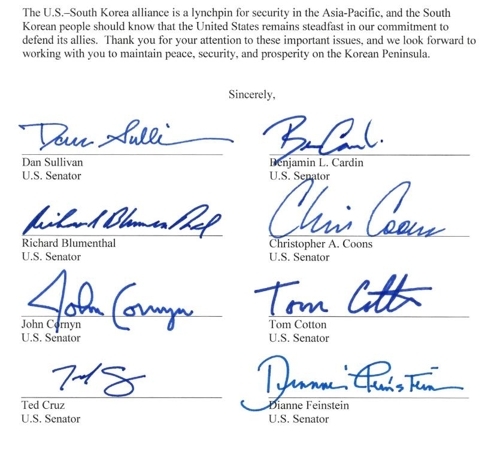 (LEAD) U.S. senators urge Trump to use summit with Xi to end Beijing's retaliation against S. Korea over THAAD

(LEAD) U.S. senators urge Trump to use summit with Xi to end Beijing's retaliation against S. Korea over THAAD