SEOUL, April 5 (Yonhap) -- Kim Chong-in, a former interim chief of the liberal Democratic Party, announced on Wednesday that he will run for president in the upcoming election in what was widely viewed as an attempt to promote a coalition against the presidential front-runner who he calls a radical.

"I wish to win the people's support in the election without the nomination of any political party," Kim said at a press conference in Seoul.

"As the best mediator who can embrace various people of various factions, I will work to help stabilize the nation and allow the people to live comfortably," he added.

Kim's presidential bid had been widely expected since his departure from the party early last month.

But few believe the former head of the country's largest party is earnestly running for president as he is often viewed as a kingmaker. 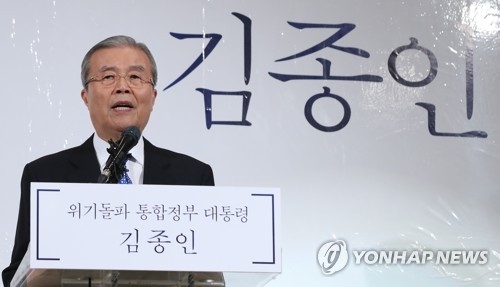 "It is my wish to see a new leader who can resolve the ongoing political, economic and social conflicts, emerge," Kim said earlier.

He also remains an outspoken critic of presidential front-runner Moon Jae-in of his former party, accusing him of practicing authoritarian leadership that he claims to despise.

Moon was named the presidential candidate of the largest party earlier this week after sweeping all four rounds of the party primary.

With Kim's self-declared bid, the number of potential contenders in the May 9 election has now come to at least eight.

All five political parties with parliamentary members have fielded their candidates. They include Ahn Cheol-soo of the center-left People's Party, Rep. Yoo Seong-min of the conservative Bareun Party and Hong Joon-pyo, the standard-bearer of the former ruling Liberty Korea Party and incumbent governor of South Gyeongsang Province.