Huawei kicked off sales of its flagship smartphone, the P10, in China on Saturday. The P10 is the successor to the mega-hit P9, whose sales reached a whopping 10 million units last year.

The high-end smartphone is equipped with a camera developed jointly with Germany-based Leica Camera.

Apple also plans to release a special edition of the iPhone 7, exclusively in red. The device reportedly gathered 270,000 preorders on the first day. Gold and red devices are normally popular in China, industry watchers said.

Samsung, which showcased the Galaxy S8 and the Galaxy S8 Plus last month, is set to hold a separate launch event in mid-April in China. The devices both adopted a double-edge display, along with a top-notch voice assistance program, named Bixby.

Industry watchers, however, said Samsung is expected to face hurdles in promoting sales of the new flagship series as some Chinese consumers remain hostile against South Korean products amid the Seoul-Beijing tension over the deployment of a U.S. missile defense system.

"China is the world's biggest smartphone market and takes up a large portion of (Samsung's) global sales," an industry watcher said. "Samsung is expected to come up with aggressive marketing strategies." 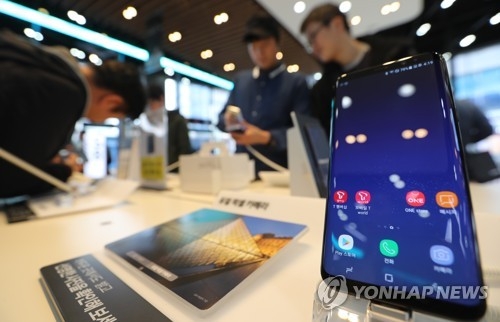 Chinese smartphone market to heat up with Galaxy S8 release

Chinese smartphone market to heat up with Galaxy S8 release