"North Korea fired a ballistic missile into the East Sea from a site in the vicinity of Sinpo, South Hamgyong Province, at around 6:42 a.m.," the Joint Chiefs of Staff (JCS) said in a statement.

The projectile flew about 60 kilometers, and South Korea and the United States are analyzing additional information, it added, with the exact type of the projectile not confirmed yet.

The U.S. Pacific Command said the projectile seems to be a KN-15 medium-range
ballistic missile, also known as Pukguksong-2, fired from a land-based facility.

Hwang ordered the nation's troops to strengthen their combat readiness in case of a contingency. 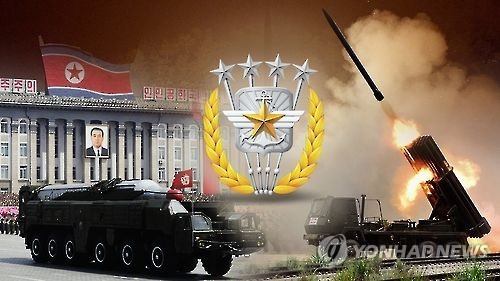 The North's move came as Trump plans to host the Chinese president in his Florida estate on Thursday and Friday (local time) for their first summit. The North Korea issue will likely be among top agenda items.

Two weeks ago, the North test-fired a missile, which ended in failure.

Earlier in March, the North fired four ballistic missiles, three of which fell into the sea near Japan. In February, it blasted a Pukguksong-2 intermediate-range ballistic missile (IRBM) from a mobile launcher.