SEOUL, April 5 (Yonhap) -- South Korea's state of welfare has improved somewhat over the past five years, but the level of happiness felt by the people has fallen, research said Wednesday.

Such results are the conclusions of a study by the Korea Institute for Health and Social Affairs (KIHASA), which derives the "KIHASA-Chosun Welfare Index" examining the level of well-being in member countries of the Organization for Economic Cooperation and Development including South Korea. The latest research measured 34 nations in five areas -- economic vitality, fiscal sustainability, welfare needs, welfare fulfillment and national happiness -- using 23 indicators.

South Korea's score in well-being rose to put it at 21st among the studied countries, up two notches from 2011.

In terms of national happiness, which considered factors such as satisfaction with life, suicide rates and life expectancy, the score fell to bring South Korea down to 33rd in the ranking from 30th.

"From the economic perspective, the indices for economic vitality, fiscal sustainability and welfare fulfillment are improving, but national happiness has dropped. The level of welfare that people can actually feel won't have changed much," the report said. 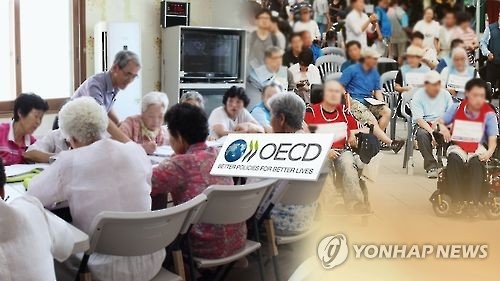 S. Korea's welfare improves, but happiness does not: study

S. Korea's welfare improves, but happiness does not: study