GANGNEUNG, South Korea, April 5 (Yonhap) -- Born in South Korea but adopted by an American family as an infant, hockey player Marissa Brandt has come back to the place of her birth in the unlikeliest of fashion: as a member of the women's national team.

Brandt, 24, was adopted by a family in Minnesota when she was four months old. She went on to play hockey at Gustavus Adolphus College in the same state from 2011 to 2015, and now finds herself playing for South Korea less than one year from the PyeongChang Winter Olympics here.

As she gears up for her first Olympics, Brandt, who acquired her South Korean passport last June, is also hoping to be reunited with her biological mother while she's in Korea.

"I think it's hard to find her. They don't have much information on my birth mother," she told Yonhap News Agency Tuesday after a team practice for the International Ice Hockey Federation (IIHF) Women's World Championship Division II Group A in Gangneung, Gangwon Province. This is Brandt's first international competition as a South Korean player. "I would like to, hopefully, be able to meet her," Brandt added.

When asked if she felt competing at the Olympics can help her in that regard, Brandt said with a smile, "Yeah, I hope so. We'll see."

Whether or not she eventually finds her birth mother, Brandt, listed as Park Yoon-jung in official lineup sheets, said it is still "an honor" to play for South Korea at the Olympics.

"It means a lot. I never thought I'd be back here and be able to represent Team Korea," she said. "I am really looking forward to what's in store for us."

Brandt's story is somewhat reminiscent of that of former U.S. freestyle skier Toby Dawson. Born in Busan, Dawson was adopted by an American couple in 1982, and grew up to become an Olympic bronze medalist in 2006. Dawson was reunited with his biological father the following year, and is now coaching the South Korean national freestyle skiing team.

Brandt may not enjoy the stature of Dawson and the South Korean women's team will probably not win a medal to put her personal history under the spotlight. But the arrival of Brandt, along with foreign-born players of Korean descent, has still generated interest in and outside the country.

In addition to Brandt, South Korea has recruited former Harvard player Randi Griffin, ex-Princeton forward Caroline Park, and Canadian university standout Danelle Im, in hopes of boosting its competitiveness for PyeongChang 2018. Griffin was born in the United States to a Korean mother and an American father, while Park and Im were both born in Canada to Korean parents.

South Korea, world No. 23 with an automatic Olympic berth as the host, is hoping these four players' experience in North American collegiate hockey will come in handy when facing Sweden, Switzerland and Japan -- all top-10 nations -- at the Olympics.

Brandt admitted there is "some pressure" on players from overseas to deliver the goods, though she doesn't feel any different being a part of the team because of that.

"I just try to bring all the knowledge I've learned growing up," she said. "I think it's my responsibility to share everything I've learned and to make this team better."

Park played for South Korea at the Sapporo Asian Winter Games in February, but has not played in the world championships so far with a shoulder injury. Brandt, Griffin and Im are all playing in their first international tournament for South Korea here. The competition doubles as a test event for the PyeongChang Winter Olympics, and both of the venues, Gangneung Hockey Centre and Kwandong Hockey Centre, will be used at the Olympics.

"It's really exciting," Brandt said of her first tournament experience with the national team. "It's really special (to skate at the Olympic rinks). I am really looking forward to the Olympics."

South Korea shouldn't be expected to pick up a win at the Olympics, but the team has improved by leaps and bounds in recent years that it is poised to win the ongoing tournament with a perfect record and earn a promotion to Division I Group B next year.

This was an unthinkable notion only a few years ago when South Korea routinely lost games by double digits.

"Each day, we work really hard to try to get better. This team has been improving every year," Brandt said. "I am hoping we can just get stronger every day. We're not the biggest team but we are speedy. If we continue to get stronger, we shouldn't have problems."

Brandt said she started playing hockey at around eight, along with her younger sister, Hannah. They both started out figure skating, but when Hannah, a former University of Minnesota standout, switched to hockey, Marissa followed suit.

Brandt has now started thinking about turning the page in her life. She married Brett Ylonen, former football player at Gustavus Adolphus, last June, and said she will "probably retire" after PyeongChang and spend more time with her husband, who is currently in the United States.

Asked if she would consider living in South Korea, Brandt said, "I haven't thought about it. We'll see what happens."

For now, Brandt is enjoying being a part of the youthful team -- eight of 22 players here are still teenagers -- and she is also glad she has teammates who can speak English because her Korean is "terrible."

"When I first came here, it was really hard because I didn't know what anyone was saying," Brandt said. "I kind of felt like on the outskirts because the language barrier was really hard. Now, they're all so nice and welcoming and teaching me words. They're learning English, too. I love them all." 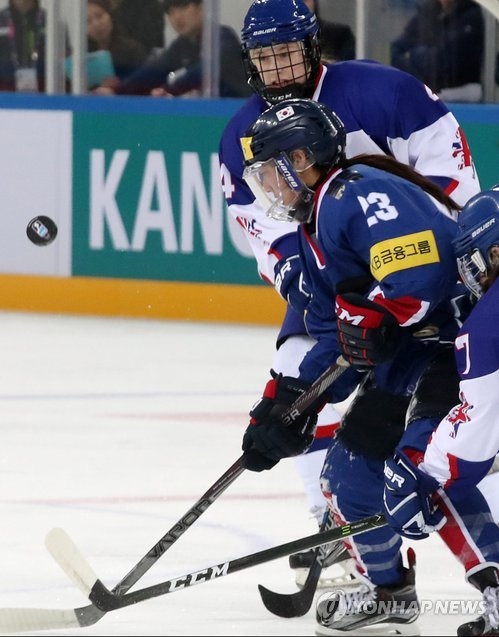