The Grandeur Hybrid is the carmaker's latest gasoline-hybrid model based on the all-new Grandeur large-size sedan. The previous hybrids were based on the Avante compact, the Sonata midsize sedan and an earlier version of the Grandeur sedan. There is also the Ioniq hybrid developed from the bottom up as a eco-friendly vehicle.

As the demand for environmentally-friendly and fuel-efficient vehicles is expected to rise further, the country's biggest carmaker plans to introduce more hybrid and electric cars for a share in the technologically advanced car markets.

Hyundai unveiled the Grandeur Hybrid mated with a 2.4-liter gasoline engine during the Seoul Motor Show that began last Friday and runs through this coming Sunday.

On Wednesday, the company held a test-drive event that allowed the local press to experience and evaluate the car on a 40-kilometer course near Seoul. 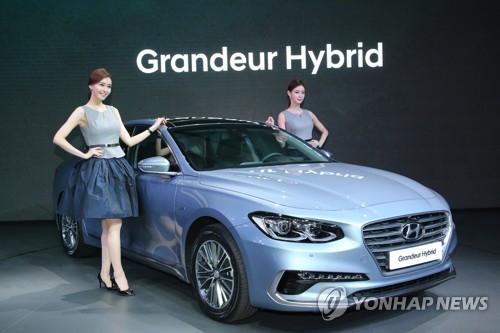 Hyundai has yet to decide on the timeframe for exporting the Grandeur sedan and the Grandeur Hybrid to markets like the United States.