According to the sources, KIS Ratings lowered its rating on Hyundai Heavy Industries Co. to "A-" from "A," citing a protracted industrywide slump, severe competition, falling new orders and lower shipbuilding prices.

Late last month, Korea Ratings also trimmed its rating on Hyundai Heavy to "A" from "A-," the lowest in 15 years. Its rating on Samsung Heavy Industries Co. was also cut to "BBB+" from "A-."

Hyundai Heavy managed to swing back to the black last year, while the two others were still mired in the red.

Korea Ratings said Hyundai Heavy will see its sales start declining in 2018, and a fall in shipbuilding prices and increased costs will prevent the shipyard from posting a meaningful recovery down the road.

"Although restructuring moves are currently under way for the local shipbuilding industry, there are still concerns about a decline in new orders amid falling order backlogs," it said. "Such uncertainties will continue for a while, which means their business performance will face increased volatility."

The local shipyards have been struggling with a drop in new orders amid a supply glut.

The combined annual new orders clinched by the country's big three shipbuilders stood at some US$10 billion last year, sharply down from $24.3 billion in 2015, $42 billion in 2014 and $54.3 billion in 2013, as low oil prices and a slowdown in the global economy reduced demand for new ships.

The shipyard received massive financial aid from its creditors through a debt-for-equity swap and the sale of perpetual bonds in 2015, which helped dress up its balance sheet without any cash inflows.

But its creditors, led by the state-run Korea Development Bank, recently have drawn up a fresh rescue package worth 6.7 trillion won for the shipyard whose cash flows have worsened further. 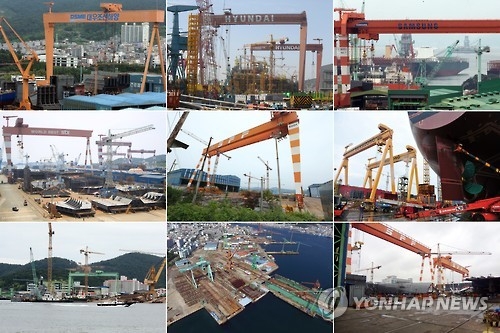