SEOUL, April 5 (Yonhap) -- South Korea will likely see the number of inbound tourists rise more than 3 percent in the first quarter from a year earlier, the culture ministry said Wednesday, despite growing woes over faltering Chinese inflow amid a diplomatic row with Beijing over a U.S. anti-missile system.

The tentative number of foreign tourists to the country stood at 3.72 million in the January-March period, up 3.2 percent from a year earlier, according to the Ministry of Culture, Sports and Tourism.

While the number of Chinese tourists slipped 9.1 percent on-year in the first three months of this year, the figure for March alone plummeted 39.4 percent in the same period, the ministry said.

The sharp decline in Chinese visitors last month came as Beijing imposed a ban on selling trips to Korea from mid-March, in apparent economic retaliation against Seoul for installing the Terminal High Altitude Area Defense (THAAD) battery on its soil. China sees it as a threat to its own defense.

The Korean culture ministry said even though the country suffered a setback from China, robust demand from other countries, such as Southeast Asia and Japan, lent support to keeping the on-year gain in the first-quarter tally.

As part of efforts to minimize the damage from China's boycott on tourism, the South Korean government has stepped out to diversify its tourist portfolio from focusing on China to other regions.

The culture ministry plans to hold a culture and tourism fest in Vietnam later this week, inviting some 100,000 locals, to promote not only Korea as a place to visit, but also as the host of the PyeongChang Olympics.

Given that Vietnam is one of the nations in Southeast Asia where the Korean Wave, or Hallyu, has gained popularity, a group of Korean celebrities and K-pop artists, including EXID, will make appearances at the event, the ministry added.

Kicking off in Hanoi, the fest is scheduled to take place in Tokyo next month, followed by London, Almaty, New York and New Delhi over the coming months through November. 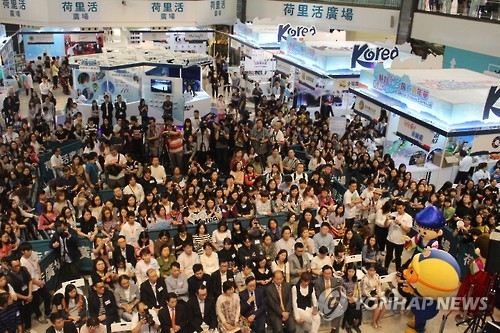 Inbound tourists to S. Korea up about 3.2 pct in Q1: ministry

Inbound tourists to S. Korea up about 3.2 pct in Q1: ministry