SEOUL, April 5 (Yonhap) -- South Korea condemned North Korea for its continued missile provocations on Wednesday, warning it would lead to toughened sanctions and eventually accelerate the "self-destruction" of the regime.

The North fired off a ballistic missile earlier in the day into the East Sea from a site in the vicinity of Sinpo, South Hamgyong Province. This marked its fourth missile test using ballistic technology this year.

"Our government strongly condemns this (latest missile test) in that it is an outright challenge to a series of U.N. Security Council resolutions and an act that poses a threat to peace and security not just on the Korean Peninsula but also to the whole world," the foreign ministry said.

"The North Korean regime should squarely see that these reckless provocations along with the recent assassination of Kim Jong-nam with a chemical weapon would strengthen the push for sanctions and punitive measures and eventually accelerate its path toward self-destruction," it added.

The ministry said that the government will keep working to increase global coordination through the UNSC against the North's repeated provocations and vowed to do its best to protect the lives of its people and national security based on the strong alliance with the U.S. and unwavering military readiness. 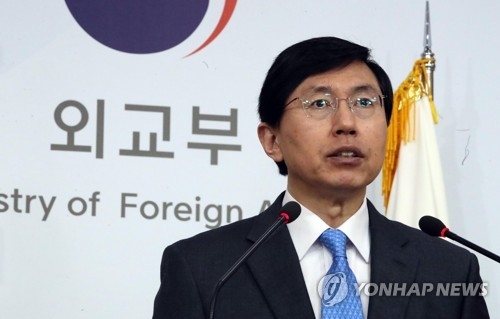 "North Korea's provocation does not help resolve (Pyongyang's nuclear and missile problems)," Lee Duk-haeng, ministry spokesman, told a regular press briefing. "We are calling for North Korea's restraint as its provocation is posing a threat to peace and stability in the world and will put the North itself in hot water."

"We will strongly deal with any additional provocation down the road," the office said.

The latest missile test came amid concerns that the North may carry out another nuclear test or long-range missile launch. It also came days ahead of the upcoming summit talks between U.S. President Donald Trump and his Chinese counterpart Xi Jinping scheduled for later this week.

Experts see the Wednesday missile provocation as a show of force and an attempt to set the tone for the first summit between the leaders of the world's two most powerful countries, amid expectations the North's nuclear issue will be among the top agenda items to be discussed.