SEOUL, April 5 (Yonhap) -- A group of government and military officials from Lebanon are set to arrive in South Korea on Wednesday for an eight-day visit aimed at better understanding the country, the South's military said.

The trip is part of a program that is aimed at promoting South Korea's image to people in Lebanon where the country has stationed the Dongmyeong military unit since 2007 as part of U.N. peacekeeping troops.

The group included key government and military officials and ordinary citizens as well as two journalists, according to the Joint Chiefs of Staff.

They plan to visit security-related spots including the truce village of Panmunjom and the Joint Security Area (JSA) and will be able to enjoy South Korean cultural programs, it said.

Since its creation in 2008, the program has invited about 310 Lebanese citizens to visit South Korea.

As South Korea's longest-serving military unit abroad, Dongmyeong is tasked with surveillance and patrol operations in the Tyre region as well as medical services for local soldiers and residents.

The Lebanese visitors will return home on April 12 alongside South Korean replacement troops who will serve in Lebanon starting this month for eight months. 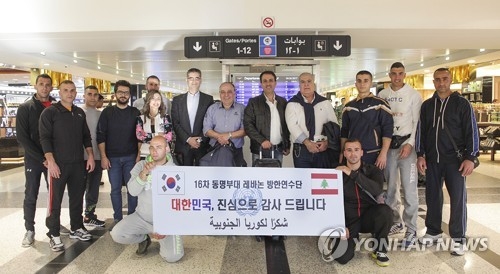