SEOUL, April 5 (Yonhap) -- As recently as early last week, liberal front-runner Moon Jae-in appeared to be a surefire winner of the next presidency with his poll ratings nearly twice those of closest rivals.

With only one month away, the election suddenly looks wide open with the rise of his old ally-turned-rival, Ahn Cheol-soo, who declares there will be a duel between the politics of hegemony and a quest for unity.

The field for the May 9 election is crowded with five party nominees, with Ahn the latest entrant, and a handful of fringe hopefuls. But pundits expect the election will sharpen into a two-way race between the two champions of liberal reforms. 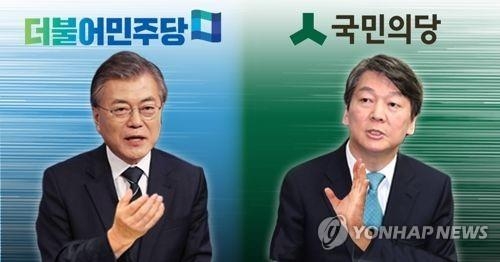 Ahn, a former software mogul and maverick lawmaker, on Tuesday clinched the nomination of the centrist People's Party, which splintered off from Moon's Democratic Party a year ago after a bitter feud between them.

His clean sweep of several rounds of the party primary shot his poll scores nearly 10 percentage points to close to 20 percent last week, rebooting his once anemic campaign. For the first time, one survey this week even predicted his win in a hypothetical matchup with Moon.

The two candidates competed for liberal votes in the 2012 presidential election before Ahn dropped out in support of Moon. Moon lost the election to Park Geun-hye, who was recently ousted over a corruption scandal.

Accepting the nomination, a steely looking Ahn declared a fight against factionalism and hegemonism, pointing to Moon, who is accused of flexing factional power in Korea's largest political party.

Ahn's party welcomed the development as a long foreseen move.

"As I have always argued, this year's presidential election is a match between Moon Jae-in and Ahn Cheol-soo," Park Jie-won, the People's Party's chief, said earlier on local radio. "We expected this frame to emerge after our nomination on April 4, but it appears to have come a week to 10 days earlier than expected."

Critics attribute his poll boost to a bandwagon effect. His chances will be shaped by if he can pull off an anti-Moon alliance among various political forces on the left and right, even with the former ruling Liberty Korea Party and the splinter conservative Bareun Party.

It will be an uphill battle for Ahn, an anti-establishment fighter who publicly condemned political engineering and is famously inept in political give-and-take.

In his acceptance speech Tuesday, the two-term lawmaker made clear he has no interest in an "engineered alliance" formed by politicians, an alliance that pardons those who were against the ouster of then-President Park Geun-hye last month, or one that aims only to oppose a certain person. 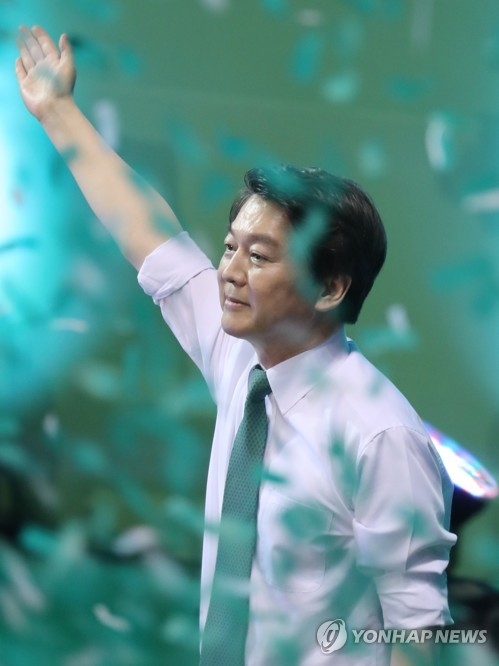 Analysts say Ahn still has much to prove if he is to absorb the conservative vote, as well as the liberal one. A key weakness that has often been cited against the People's Party is that it only holds 39 of the 300 seats in the National Assembly.

"It's possible Ahn could have (a chance in a) head-to-head contest in terms of his personal competitiveness, but with only 39 seats, he has to provide an answer to questions about his ability to run state affairs," said Yoon Tae-gon, an analyst at the political consulting firm Moa.

He warned Ahn against abandoning his trademark stand-alone strategy that has apparently appealed to voters disillusioned with both ends of the political spectrum.

"He has to hold on as long as he can even if circumstances change for the worse," Yoon said.

But Moon's campaign has reason to be alarmed. Korea's recent history showed the presidential election is prone to flux. And the Democratic Party nominee's popularity began to rise only in recent months largely driven by the downfall of Park, to whom he lost the 2012 election.

Indeed, Moon's side reacted with visible irritation. His campaign considered asking the national election watchdog to look into the first opinion poll that placed Ahn ahead of him in a hypothetical matchup. According to the survey released Monday by local pollster The Opinion, Ahn garnered 43.6 percent against Moon's 36.4 percent.

It was a humiliation to Moon who has topped nearly all opinion surveys since early this year, with approval ratings of over 30 percent.

The nominee launched his own personal attack on his longtime rival Monday when asked about the growing prospect of competing against Ahn.

"A two-way race between me and Ahn Cheol-soo would be possible after Ahn unifies candidacies with the old ruling party," he said in a press conference held after his nomination.

"If that happens, if he becomes a candidate representing also the old ruling party, that would mean he is a candidate pursuing an extension of the regime of the deep-rooted evil forces." 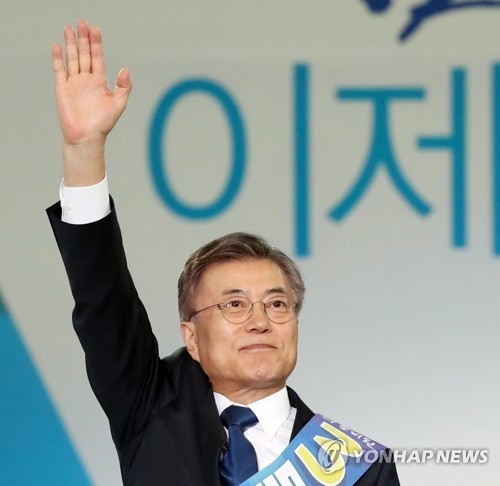