The KFA technical committee, led by Lee Yong-soo, plans to add two members to Stielike's backroom staff to help the national team qualify for the 2018 FIFA World Cup in Russia, according to the official, who asked not to be named. South Korea are looking for a ninth consecutive World Cup appearance but have disappointed fans with a mediocre performance last month.

Stielike has been in hot water after his team fell 1-0 to China and collected a nail-biting 1-0 win over Syria at home with uninspiring performances. While angry fans here called for Stielike's head, questioning his tactical acumen and his selection of players, the technical committee on Monday decided to keep the German head coach at the helm and promised to provide more support to him. 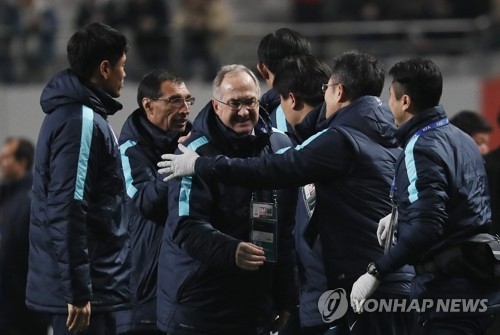 The technical committee, comprised of 12 members, previously planned to recruit a foreign chief assistant coach, but failed to land a deal.

"Stielike observes players in the K League, but since he is a foreigner, it's not easy to grasp every player's characteristics," the official said. "All members of the technical committee will check national team-caliber players' performance every week, and will have a meeting before the new technical advisor gathers data and give them to Stielike."

With three matches remaining in the final Asian qualifying round for the 2018 World Cup, South Korea are second in Group A that also features Iran, Uzbekistan, Syria, China and Qatar. The Taeguk Warriors have 13 points from four wins, one draw and two losses, four points behind leader Iran and one point above No. 3 Uzbekistan.

Only the top two teams in the six-team group directly advance to the World Cup in Russia, while the third-place team must go through playoff rounds to enter the world football's showpiece event.

South Korea's next match is against Qatar on June 13. The national team will then host Iran on Aug. 31 before taking on Uzbekistan five days later on the road.

The official said the new fitness coach will start working with Stielike to prepare for the qualifier against Qatar that is expected to be played in hot weather. Armua currently manages the national team players' fitness, but the technical committee believes the addition of another fitness expert will further help the national team.