SEJONG, April 5 (Yonhap) -- The Environment Ministry said Wednesday that it will expand a project to prevent wild boars inhabiting Mount Bukhan in Seoul and neighboring Gyeonggi Province from entering downtown areas, as the animals have increasingly posed challenges to residents there.

The project, which started last year in cooperation with the regional governments of Seoul and Gyeonggi and the Korea National Park Service, calls for capturing wild boars and setting traps or other facilities on their major trails to make it difficult for them to roam downtown streets and residential areas.

A wild boar, about 1 meter long and 80 kilograms in weight, was seen running toward a residential area near Gwanghwamun plaza in downtown Seoul on early Sunday before being hit by a taxi and killed.

Last year, the Seoul metropolitan government and the office managing the mountain national park hunted down 107 wild boars and erected a 220-meter facility over a tunnel to keep them on the mountain, helping decrease the frequency of the animals reaching downtown areas by 58 percent from a year ago.

Ministry officials said that this year they aim to have more than 150 wild boars on the mountain captured and incidents of them entering downtown areas lowered by more than 30 percent from last year.

Under the project, the ministry will provide 1.35 billion won of the nation's budget to implement the program. The Seoul and Gyeonggi regional governments will install more facilities to keep them from entering residential areas, set traps, a combined 4,200 meters wide, at 18 places and hunt them in five areas.

The national park management office will take a set of measures to keep wild boars from getting off the mountain to forage for food that include the closures of byways and a ban on picking wild fruits.

The ministry plans to expand the project to the central city of Daejeon, the southwestern city of Gwangju and the country's other regions next year after completing a study on the animal's nationwide inhabitation. 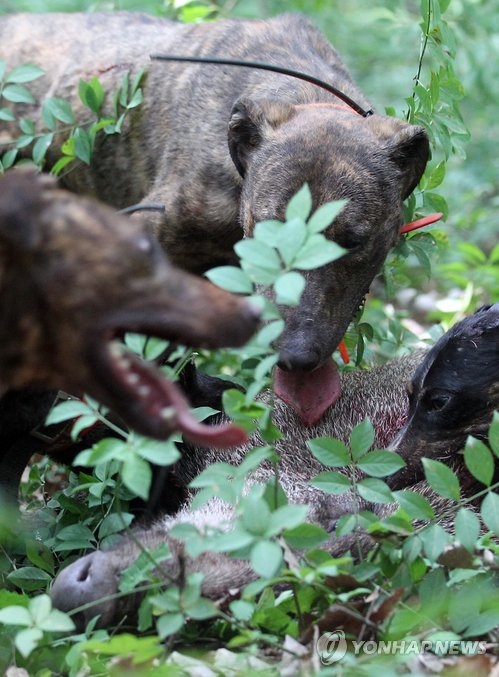