MOKPO, South Korea, April 5 (Yonhap) -- The South Korean government said Wednesday that it will move the salvaged Sewol ferry onto a dry dock on land as scheduled despite technical difficulties and inclement weather conditions.

The 6,800-ton ferry was raised from the bottom of the sea and moved to the port of Mokpo, some 410 kilometers southwest of Seoul, on a semisubmersible transport ship. It sank off the country's southwestern coast near Jindo Island in April 2014, leaving more than 300 people dead and nine still missing.

The vessel is being readied to be transported to a dry dock at the port city so a thorough search can be carried out for the missing bodies that may still be inside the wreck.

"We are planning to put the Sewol on 480 modular trailers on Thursday as planned," said Lee Cheol-jo, the head of the government-led operation team.

Since the Sewol arrived at Mokpo on Friday, operators have been draining water and mud from the hull in order to reduce the overall weight. Due to the water and mud, the ferry is estimated to weigh around 14,592 tons at present.

The government had considered delaying the schedule to land the ferry as some experts cautioned it is too heavy to transport onto modular trailers.

Officials and the salvage operator, however, said an attempt will be made on Thursday as planned before the neap tide period ends on Saturday. It is expected to take three to four days to move the ship from the transport vessel to where it can be checked.

If the Thursday attempt does not work, the salvage operation will use other transport systems to give it another try before April 10.

Meanwhile, 20 animal bone fragments and some 100 items including a passport, bags and other personal belongings have been discovered on the deck of the semisubmersible ship carrying the Sewol.

Also, a massive search has started at the site where the Sewol ferry sank to find the possible remains of those still missing and other clues that can shed a better light on why the ship sank.

The government plans to employ private data recovery services to restore the content of mobile phones or automobile black boxes found on the ship in order to see if they could have any clues to the cause of the sinking, officials said. 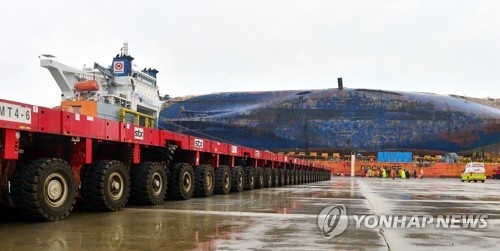