Calls have been growing for Hong to resign quickly to pave the way for a by-election to be held in tandem with the presidential vote on May 9. But he has vowed to have his successor selected through the regular gubernatorial elections in June 2018, saying a by-election would be costly and only destabilize the provincial administration.

To run for the country's top elected office, a public servant must resign by April 9, or 30 days before the vote. The election watchdog must be notified of the resignation by that day to hold a by-election together with the presidential poll.

Hong said that he would resign on April 9, but have the election watchdog notified of his departure the following day. 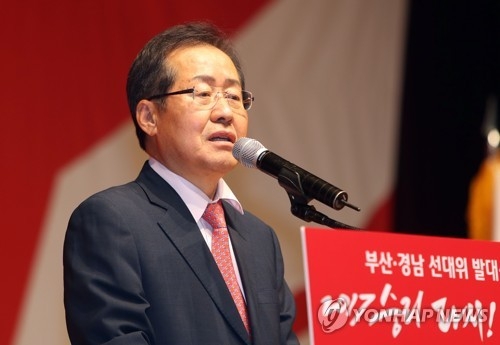 His opponents accused him of using a "political ploy" to prevent a liberal figure from succeeding him and hampering the legally guaranteed electoral procedures. They also feared that without a by-election, the provincial government will be left rudderless for more than a year.

"Hong's move against a by-election is an act that denies or destroys our Constitution," Chung Young-hoon, a senior member of the liberal Democratic Party's regional chapter for South Gyeongsang Province, told reporters Tuesday.

Chung pressured the election watchdog to deal with Hong's resignation immediately after his resignation on April 9 to enable a by-election to take place on the presidential election day.

Despite mounting criticism, Hong doubled down on his rhetoric against the by-election, stressing that the costly election will trigger a chain of resignations by top officials and plunge the provincial government into a period of "confusion."

"For the by-election, mayors and county chiefs may opt to resign to throw their hats into the ring, and provincial legislative councilors will seek to run for mayoral and county chief posts," Hong said at a press conference.

"After a series of resignations, the election would then cost some 30 billion won, which should have to come from the coffers of the province," he added.

Hong has emerged as the potential standard-bearer of the conservative camp for the presidential election after Acting President and Prime Minister Hwang Kyo-ahn opted out of the race seen more favorable to the liberal bloc following a corruption scandal involving ousted President Park Geun-hye.

Hong faces mounting criticism over his resignation as governor

Hong faces mounting criticism over his resignation as governor