SEOUL, April 5 (Yonhap) -- Korean animal rights activists called on Norway to stop its whale hunt in a rally in Seoul timed with the start of its annual whaling season.

Members of the coalition comprising the Coexistence of Animal Rights on Earth, the Korean Animal Welfare Association and the Hotpink Dolphins staged the protest in front of the Norwegian Embassy in Seoul.

The rally came after the North European country's six-month whaling season began on Saturday with a quota raised from 880 last year to 999.

They challenged Norway's assertion that the minke whale is not an endangered species with an estimated 100,000 living off the Norwegian coast where the hunt is due to take place, adding "the number of the animal includes that of minke whales returning to the North Atlantic and the Arctic Ocean in spring."

"That many minke whales do not inhabit waters off Norway all the time," they said. "Ninety percent of those whales slaughtered by Norway every year are female and most of them are pregnant."

They also said the "No Way, Norway" petition calling for the end of Norway's whale slaughter has garnered more than 2.6 million signatories.

During Wednesday's rally, the coalition revealed data from the International Whaling Commission that says about 140,000 minke whales have been hunted in the North Atlantic since the 1940s, 120,000 of which were killed by Norway. 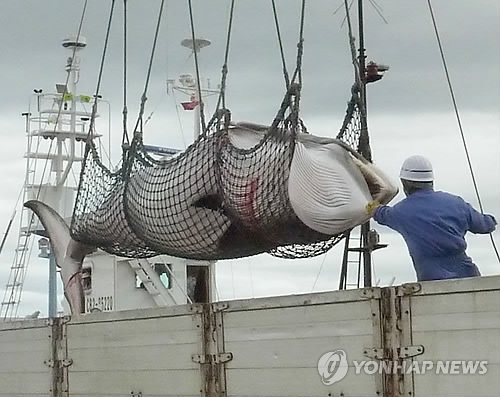