SEOUL, April 5 (Yonhap) -- Yoo Seong-min, the presidential nominee of the Bareun Party said Wednesday if elected he would upgrade the country's deterrence against North Korean threats by introducing more U.S. missile defense systems and pushing for the deployment and joint operation of U.S. nuclear assets here.

Laying out his security-related election pledges, the candidate of the splinter conservative party said that "currently, the United States single-handedly makes most decisions regarding its nuclear assets" in South Korea.

"I will demand a higher level of cooperation (between Seoul and Washington) than the one between the U.S. and NATO through a summit and talks between defense and foreign ministers that will be held immediately after my inauguration and win the United States' concession," he said. 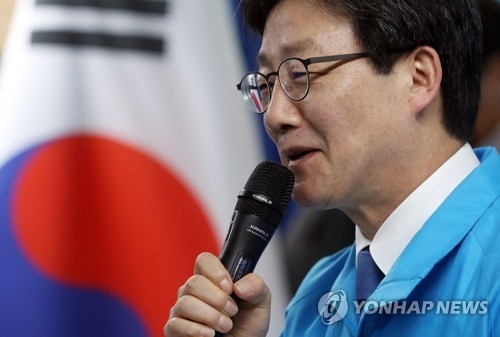 He also proposed devising manuals for joint military exercises involving the possible use of the U.S. nuclear arsenal.

The U.S. currently does not physically maintain nuclear capabilities on the Korean Peninsula, but repeatedly confirms that its Asian ally is under its nuclear umbrella, meaning it will bring such weapons here if necessary.

The U.S. Forces Korea is in the process of deploying one THAAD battery to Seongju, located some 300 kilometers south of Seoul.

The presidential contender said one or two more THAAD batteries would enable multi-layered defense and protection against North Korean missiles. He said he expected each additional THAAD unit to cost the country about 1 trillion won (US$890 million).

Yoo said he will gradually increase the country's defense budget to 3.5 percent of its gross domestic product from the current 2.4 percent if elected.