SEOUL, April 5 (Yonhap) -- South Korea's financial regulator on Wednesday granted a final approval to Kakao Bank, paving the way for the nation's second Internet-only bank to launch operations in the first half of this year.

The approval by the Financial Services Commission (FSC) came as its rival K-Bank, the first Internet-only bank, which started operations earlier this week, appears to have succeeded in attracting customers.

The launch of Internet banks is aimed at reinvigorating the nation's financial sector, which is grappling with slower growth and low margins, FSC officials said.

Yim Jong-yong, chairman of the FSC, said in a statement that a "fierce competition" among traditional and Internet banks would take shape in the second half of this year.

With a paid-in capitalization of 300 billion won (US$266.7 million), Korea Investment Holdings Co. holds a 58 percent stake in Kakao Bank.

Kakao, Kookmin Bank, Korea Post, Netmarble and Tencent Holdings Ltd. of China are among the shareholders of Kakao Bank.

In just two days since launching operations Tuesday, K-Bank, formed by a consortium of KT Corp., Woori Bank and 19 other companies, has attracted more than 60,000 accounts.

The pace of growth in K-Bank's customer base appears to be faster than expected. The average monthly number of new Internet banking accounts by the nation's 16 commercial banks stands at about 12,000. 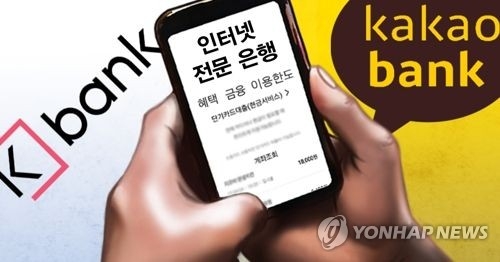 Kakao Bank officials said it will take about seven minutes for a customer to open an account.

Along with deposit and loan services, Kakao Bank plans to launch a credit card business, bank officials said. Kakao Bank will also offer investment advice and recommendations about banking products to its account holders through KakaoTalk.

Kakao Bank "has been preparing for financial products and services that provide bigger benefits to customers with more convenient transaction procedures," the bank said in a separate statement.
(END)