SEOUL, April 5 (Yonhap) -- Ahn Cheol-soo, the presidential nominee of the centrist People's Party, marked the start of his campaign Wednesday by meeting with citizens on an early morning subway.

Ahn, who has recently emerged as a formidable challenge to liberal front-runner Moon Jae-in in the May 9 poll, won the nomination of his party a day earlier.

Riding the subway from near his home in Nowon district, the former software mogul talked about various issues, including how he would handle the growing problem of fine dust blowing in from China.

"The fine dust that comes from China has to be resolved by diplomatic means," he said. "Now our foreign policy must cover environmental issues." 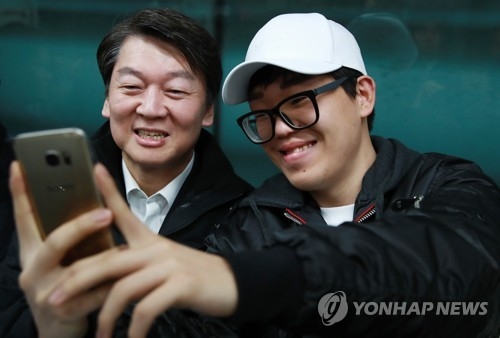 During the 10-minute ride, Ahn also took selfies with passengers and broadcast himself live on Facebook at the request of one citizen. Another citizen gave him a book as a gift.

When one passenger complained of his long commute to work, Ahn sympathized with him, saying it takes him 1 1/2 hours to travel from home to the National Assembly. The two-term lawmaker pointed out there should be more and better jobs in the northern area of Seoul, including Nowon.

Ahn has cast himself as a self-made politician who has built a career on nothing but his own efforts. Moon of the Democratic Party, on the other hand, has the backing of followers of the late liberal icon and former President Roh Moo-hyun.

The subway ride was apparently a move designed to consolidate that image claimed by Ahn.

"I just took the subway from Sanggye-dong," he said later during a press conference at the National Assembly. "The neighborhood of Sanggye-dong, where I live now, is where self-made people first settle down."

Ahn also visited the National Cemetery in Seoul to pay his respects to the country's past leaders.

In South Korea, it is customary for politicians to honor former presidents to mark the start of a new journey. 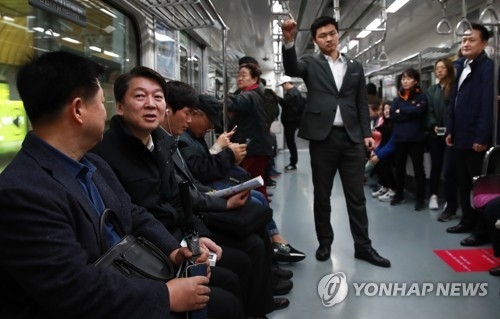