The operator of Shilla Duty Free said it has secured the business licensing for fragrance, cosmetics and fashion accessories zones at the airport, with the shops scheduled to open around the end of this year. The licensing will expire in September 2024, it said.

Winning the bid for the Chek Lap Kok airport makes Hotel Shilla the sole player among its rivals, including Hotel Lotte Co., with duty-free stores running at three major international airports in Asia: Singapore's Changi Airport and the Incheon International Airport on home turf and the Chek Lap Kok.

According to Hotel Shilla, the Chek Lap Kok airport has some 75 million passengers passing through everyday, with about 1,100 airplanes run by over 100 airliners landing and taking off.

Lotte was apparently also one of the bidders, but failed to win it.

Hotel Shilla said it will boost efforts to achieve its annual revenue target of 1 trillion won (US$889 million) in the duty-free business. In 2016, it raked in some 500 billion won in overseas sales, the largest in terms of revenue compared with its local rivals. 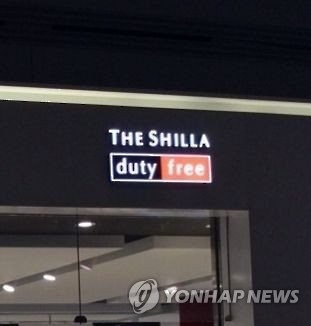