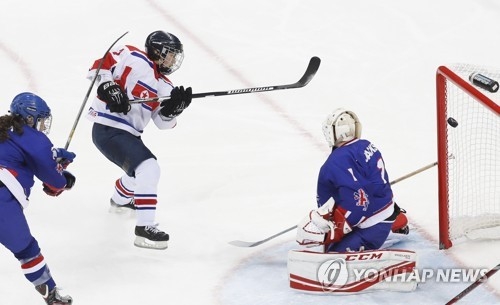 North Korea lost to Australia and the Netherlands earlier in the tournament. At last year's world championships, Britain had blanked North Korea 7-0.

This year's tournament, doubling as a test event for the 2018 PyeongChang Winter Olympics, also features host South Korea (No. 23), the Netherlands (No. 19), Slovenia (No. 24) and Australia (No. 28). The top nation after round-robin play will be promoted to Division I Group B next year, while the last-place nation will be relegated to Division II Group B in 2018.

North Korea wasted three power-play chances in the scoreless first period, when the teams each put 10 shots on goal.

After a dull stretch, North Korea broke the scoreless deadlock with a short-handed goal at 17:54 in the second period.

North Korea doubled the lead just two minutes into the third period, this time scoring on a power play. Jin Ok settled behind the British net and fed defenseman Won Chol-sun, who snuck in through the defense for a one-timer from between the face-off circles.

Just when North Korea appeared headed for its first win here, Britain woke up with two goals in 56 seconds.

Angela Taylor first cut the deficit in half with a wrist shot from the right face-off circle at 9:53. Then at 10:49, Leanne Ganney went on a breakaway when defenseman Kim Nong-gum was caught flat-footed in her own zone and beat So Jong-sim to make it a 2-2 affair.

Britain could have sealed the deal with 1:05 left to play, but Katie Henry was stoned by So on a 2-on-1 chance.

Then 1:59 into overtime Jin ended the game by poking home a loose puck near the crease after a mad scramble.

Britain outshot North Korea 35-29 in the losing cause. 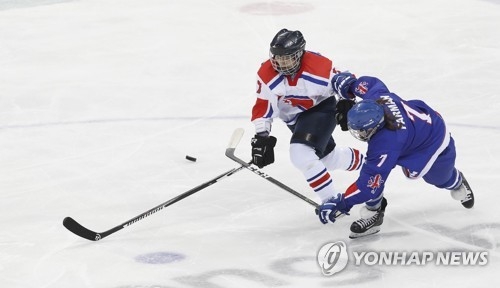