"You never expect what's going to happen until you play the match," Kim told reporters after completing the match against Hong Kong. "I believe our players will fight well (against South Koreans) with their strong mentality."

Kim's side will meet South Korea on Friday and the winner of the all-Korean showdown is expected to finish atop the qualification. The Koreas are the top two contenders for the Asian Cup qualification based on the latest FIFA rankings. North Korea are ranked No. 10, third-highest among all AFC members, followed by South Korea (No. 17), Uzbekistan (No. 42), India (No. 56) and Hong Kong (No. 65). 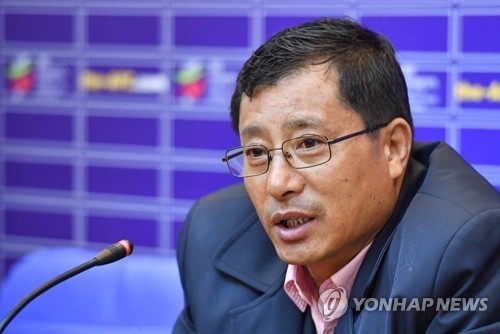 North Koreans boast dominant head-to-head against South Koreans with 14 wins, one loss and two draws. Their only loss to South Korea came in 2005.

Kim said that his side will rely on young players who won the FIFA U-20 Women's World Cup title last year in Papua New Guinea.

"We have many players who joined the senior national team after winning the U-20 World Cup," he said. "Most of them played at the senior level for the first time. I believe these matches will serve a good opportunity to become better players."

Against Hong Kong, North Korea easily cruised past the visitors after scoring four goals in the first half. Forward Kim Yun-mi grabbed a brace for North Korea and they were also helped by an own goal from Hong Kong defender Ho Wan Tung. However, Kim didn't seem very satisfied with the performance.

"I think we didn't score as many goals as I hoped," he said. "Hong Kong had tight defense, and we didn't control the match smoothly to unlock their defense.