GANGNEUNG, South Korea, April 5 (Yonhap) -- South Korea will try to keep its focus on its own game when it takes on North Korea in a much-anticipated match at the women's hockey world championships at home, the team's coach said Wednesday.

Sarah Murray said the key for South Korea will be not to worry about what their opponent will do when the most hyped-up contest at the International Ice Hockey Federation (IIHF) Women's World Championship Division II Group A takes place at Gangneung Hockey Centre in Gangneung, Gangwon Province at 9 p.m. Thursday.

"We've been telling the players to really focus on what we do and what we do well," Murray said after her team defeated Australia 8-1 for the third consecutive victory. "We'll show the players some clips of North Korea but we'll just focus on executing our systems well. And we'll make them adjust to how we play; we won't adjust to how they play." 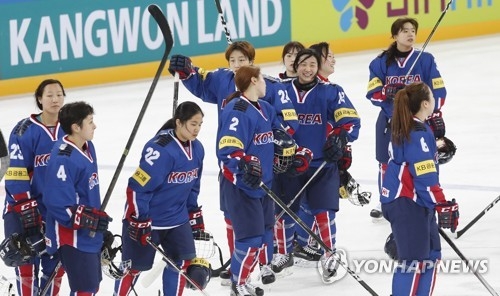 South Korea, ranked 23rd, has been cruising in this tournament with 16 goals scored against three allowed. No. 26 North Korea started out with two straight losses but beat Britain 3-2 in overtime Wednesday.

While North Korea will be riding high after that dramatic win, South Korea should have little trouble beating North Korea.

Murray said the two Koreas have similar teams, with small but quick players in their lineups, and added Thursday will present "a very interesting matchup."

"They're a lot faster than last year. They're more skilled than they were last year," Murray said, referring to last year's world championships when South Korea prevailed 4-1. "We just need to make sure we don't take them for granted."

Top-line forward Park Jong-ah, who had two goals and two assists against Australia, said South Korea should be wary of North Korea's speed.

"Their players have similar builds as us, and they're pretty fast," Park said. "We have to skate hard so they won't beat us in the speed department. We've come here to win the tournament and we have to take it one game at a time."