In the run-up to the meetings at his Mar-a-Lago resort in Florida, Trump spoke a lot about what he's going to be discussing with Xi while picking North Korea and trade as the two most important issues and predicting that the talks will be "very difficult."

"I will be meeting with the president of China very soon in Florida, and that's another responsibility we have and that's called the country of North Korea. We have a big problem. We have somebody that is not doing the right thing," Trump said, referring to North Korean leader Kim Jong-un.

On Tuesday, Trump called the North "a humanity problem." Just hours later, Pyongyang carried out its latest ballistic missile firing, adding to the urgency of the problem. It was the North's fourth missile launch attempt this year since it test-fired a newly developed intermediate range ballistic missile in February.

The goal sounds ambitious and the strategy sounds tough, but experts say China is unlikely to agree to do what it has refused to do for decades: fully exercising its leverage as the North's main provider of food and energy to rein in the provocative regime.

"The North Korea nuclear problem is at the top of the Trump-Xi agenda, and Trump may try to link it to trade and threaten to sanction Chinese banks facilitating North Korean entities, but China is unlikely to agree to put more pressure on North Korea," said Robert Manning, a senior fellow at the Atlantic Council.

Xi could express a willingness to accept secondary sanctions on Chinese banks or firms that facilitate North Korean entities, but most of these are smaller, regional banks or front companies, which won't cause any great pain to China, Manning said.

"This would be the best case," he said. "It is equally possible Trump will push China to 'solve' North Korea and Xi will push back, blaming the U.S. for threatening the regime and pushing 'regime change.' This is the well-known blame game that goes around in circles and goes nowhere."

Instead, Xi is expected to offer a package of "sweeteners" that Trump can tweet as victories, mostly promises to increase Chinese investment and job creation in the U.S., which could rival or surpass what Japanese Prime Minister Shinzo Abe offered during his visit to the U.S.

"Xi will arrive at Mar-a-Lago with a phalanx of Chinese businessmen willing to invest massively in U.S. infrastructure projects and economic cooperation," Manning said. "But unless China is prepared to reverse the trend of closing off the Chinese economy to foreign investment and commit to an agenda of reciprocity, the summit will likely be more important in establishing a rapport between the two leaders." 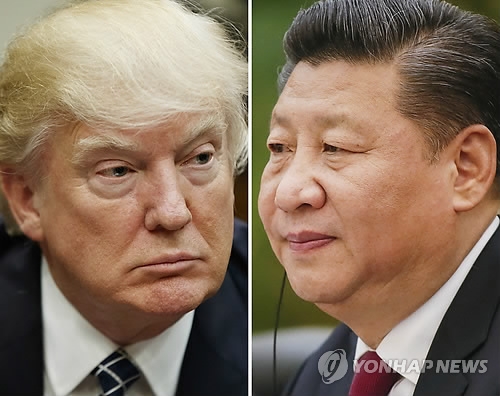 The Trump administration has shown increasing impatience with the North, with Secretary of State Rex Tillerson openly mentioning the possibility of using military options. After Tuesday's missile launch by the North, Tillerson also issued an unusually blunt statement expressing displeasure.

A senior White House official, who spoke on condition of anonymity to preview the summit with Xi, also said Tuesday that the clock for resolving the North Korean nuclear issue "has now run out," and the U.S. is looking at "all options on the table."

The official also said how to deal with North Korea is a "test of the relationship" between the U.S. and China.

However, experts say it won't be easy to win Chinese cooperation on the matter.

Brad Glosserman, executive director of the Pacific Forum, a program of the Center for Strategic and International Studies (CSIS), also said that differences between the U.S. and China over how to deal with the North are too wide to narrow.

"The Trump administration believes Beijing has failed to exercise the leverage that it has over Pyongyang, casting China as part of the problem rather than part of the solution," Glosserman said in the forum's newsletter. "China believes that it has done all it can, that the solution lies in direct talks between the US and North Korea and that tough talk of preemption and military options is destabilizing."

But analysts don't expect much from the meeting.

"On THAAD, I expect they will agree to disagree. The problem for the U.S. is that China knows THAAD does not compromise their nuclear deterrent. They are worried that THAAD is just one piece of a larger U.S. strategy to neutralize their nuclear forces," Manning said. "But the US and ROK can't not prove a negative to disprove China's conspiracy theory."

(LEAD) (News Focus) Trump-Xi summit may not yield much progress on N. Korea

(LEAD) (News Focus) Trump-Xi summit may not yield much progress on N. Korea