"I'm not going to go into specifics of our approach on North Korea, but I will say this is going to be an early topic in our conversation during the summit," Matt Pottinger, senior National Security Council director for Asia, told reporters in response to a question whether secondary sanctions will be discussed during the upcoming summit.

"We will not sort of broadcast talking points of the president in advance but of course the question of sanctions generally is very much a live one," the official said during the Foreign Press Center briefing to preview the Trump-Xi meetings set for Thursday and Friday.

Secondary sanctions, also known as a "secondary boycott," are considered one of the last-remaining sanctions tools against the North, and calls for penalizing companies doing business with Pyongyang. Chinese firms are expected to be subject to the measure as most of the North's dealings with the outside world are with China.

Former U.S. President Barack Obama was reluctant to impose secondary sanctions out of fear of souring relations with China. But Trump is widely expected to pursue those measures as he has been strongly critical of Beijing for not helping resolve the North Korea problem. 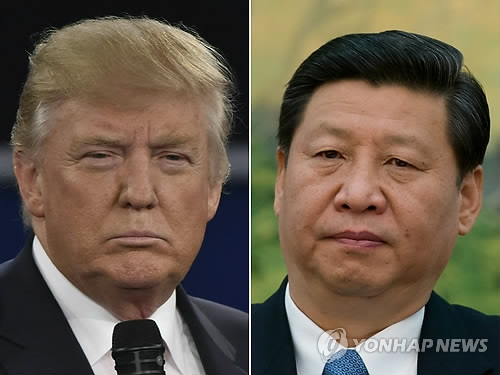 Trump has made it a top priority to get China to exercise more of its considerable leverage over the North as the main provider of food and energy for the impoverished nation that has been under a string of international sanctions for many decades.

Pottinger said that applying more pressure on Pyongyang is "something that China has the ability to bring to bear in a way that no other single country can."

"We'd like to see China working closely with the U.S. to address the menace emanating from North Korea, their weapons programs, the provocations that we've seen every week, missile launches, including one that we had not too many hours ago," he said, referring to the North's latest missile launches early Wednesday (Korean time).

"There's an opportunity for that to be an area of cooperation and to grow that. I think it's in Beijing's interest. I think that North Korea long ago ceased to be a strategic asset for China. It is now quite clearly a strategic liability and it is one that is having an impact on the region. It is one that has the potential to destabilize not only the peninsula but really the region as well," he said.

A senior White House official, who spoke on condition of anonymity to preview the summit with Xi, also said Tuesday that the clock for resolving the North Korean nuclear issue "has now run out," and the U.S. is looking at "all options on the table."

The official also said how to deal with North Korea is a "test of the relationship" between the U.S. and China.